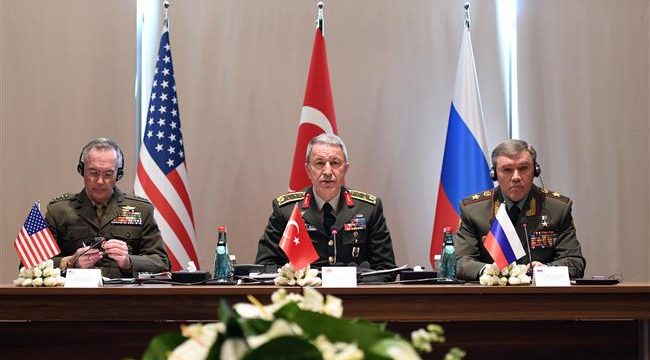 FNA- The top soldiers of Turkey, the United States and Russia came together in Antalya in a first of its kind tripartite summit, the Turkish military has stated, highlighting developments in Syria and Iraq as top issues of the agenda.

Sources said the meeting began early on March 7 and is expected to continue through the day. Pictures distributed by the Turkish army feature the three top soldiers sitting side by side.

The top soldiers of the three countries held bilateral meetings in recent months, particularly on security issues in Syria and Iraq, but have never met in a three-way meeting.

The statement said they discussed security issues concerning Syria and Iraq, without further elaborating. The meeting comes as Turkey presses both Russia and the U.S. to cease cooperation with the Syrian Democratic Union Party (PYD) for defeating the ISIL militant group.

Turkish Prime Minister Binali Yildirim hinted about a military-to-military meeting between the three countries in an interview with the private broadcaster A Haber late on March 6.

“There is no point in doing an operation on Raqqa without coordinating with Russia and the US. It would be futile and the consequences may become more complicated. For that, there are military, technical negotiations going on,” Yildirim said.

He recalled Turkey’s proposal for a joint operation on Raqqa on the condition that the PYD will be excluded but stressed that Washington has not yet replied to Ankara.

“We have conveyed our offer to the US. There has not been a formal response yet. So it would not be right to say ‘they have other plans’ just by taking what has been written about the issue into account. But we will not be anywhere there are terrorist organizations. It is that clear,” Yildirim added.

Yildirim said Turkey’s main purpose in possible operations toward Manbij, al-Bab or other parts of Syria is to push the PYD and its armed wing, the People’s Protection Units (YPG), to the East of the Euphrates River.

“It is quite natural that there would be Syrian elements there after it is provided. Because it is Syrian territory,” he said.

“It can be the US or it can be Russia. We are saying, if it is desired, we can make a triple mechanism with Russia, the US and Turkey,” he said.

“When terrorist groups like the PYD and the YPG are completely cleared, same as we did in Jarablus with the Euphrates Shield operation, or in al-Rai, Dabiq and as we have started to do in al-Bab, Syrians will come and settle there. Life will go back to normal,” he added.