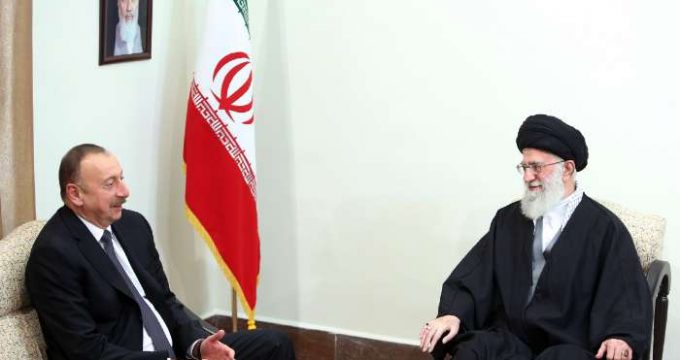 IRNA – Supreme Leader of the Islamic Revolution Ayatollah Seyyed Ali Khamenei said on Sunday that the interest and expediency of the Azeri government rests in sharing with people religious sentiments.

The Supreme Leader made the remarks in a meeting with visiting Azeri President Ilham Aliyev in Tehran on Sunday.

Religious commonalities bring more affinity between the two nations and officials, the Supreme Leader said, adding that the current level of economic cooperation is much lower than existing facilities and capabilities and should be increased ten-folds.

The stances adopted by Azerbaijan in dealing with Iran’s nuclear dossier was very good, the Supreme Leader said.

Azeri government has always backed Iran in political gatherings and their stances have brought us much closer, Ayatollah Khamenei said.

The evil Zionist regime more than other enemies try to weaken brotherly relations between Iran and Azerbaijan and the two sides should be vigilant in protecting such sincere relations, the Supreme Leader said.

The interests and expediency of the Azeri government rests in sharing with people religious sentiments in a way that the people should not be worry about government’s stances to this end, the Supreme Leader said.

President Hassan Rouhani was also present in the meeting.

Relations between Iran and Azerbaijan is excellent and the futile attempts of the enemies to aimed at weakening will be useless, he said.

Over the past three years, I have visited Iran three times and some 20 MoU’s on broadening mutual cooperation between the two countries have been signed and the volume of trade exchanges between the two sides have increased by 70 percent as compared to last year’s corresponding period, he said.

Current volume of trade exchanges between Iran and Azerbaijan is not satisfactory, he said, adding that contraction of joint rail tracks was a very significant job and the two sides are now working on South-North corridor, he said.