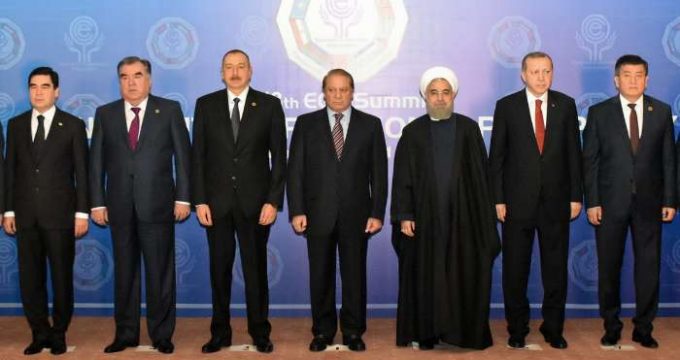 The Iranian Navy displayed and successfully test-fired an advanced domestically-made guided missile system dubbed “Dehlaviyeh” which is specialized in targeting vessels and ships.

President Hassan Rouhani met his Turkish counterpart, Recep Tayyip Erdogan on the sidelines of the 13th ECO Summit in Islamabad on Wednesday and discussed bilateral ties and regional developments.

Iran is likely to go on an international shopping spree for surface warships, submarines and anti-ship missiles after the expiration in 2020 of a United Nations resolution prohibiting it from acquiring sophisticated weapons, according to the U.S. Office of Naval Intelligence.

Secretary of State Rex Tillerson held private talks with head of the United Nations atomic watchdog agency Thursday in the first direct meeting between the outfit monitoring the Iranian nuclear accord and a senior official from the Trump administration, which has been sharply critical of the 2015 deal.

Iran to give crushing response to any possible aggresssion: Comdr

Commander of Khatam ul-Anbia Air Defense Base Brigadier General Farzad Esmaeili Iran will severely respond any possible aggression on its territory “with a strong fist”.

Damavand military drill has test-fired S300 air defense system, during which it successfully targeted aerial vehicles flying in the outreach.

President Rouhani: US ashamed by Iran’s visas for American wrestlers

President Hassan Rouhani said that Iran’s move to grant visas to the American wrestlers who attended the newly-ended World Cup in Iran has ‘made the US administration ashamed’.

Iranian Foreign Minister Mohammad Javad Zarif says strengthening cooperation between the Islamic Republic and the Commonwealth of Independent States (CIS) on different issues will serve the interests of the region.

Foreign Minister Mohammad Javad Zarif said on Saturday that Iran’s private companies are interested in the expansion of trade exchanges with Sri Lanka.

Spokesman for the Atomic Energy Organization of Iran (AEOI) Behrouz Kamalvandi highlighted the progress in the country’s peaceful nuclear program and said the Islamic Republic faces no problems in exploring, converting and enriching uranium.

The International Monetary Fund (IMF) has hailed Iran’s ability to achieve what it has described as an impressive economic recovery after the removal of multiple-year sanctions against the country.

Chinese telecom equipment maker ZTE Corp (000063.SZ)(0763.HK) is nearing an agreement to plead guilty to U.S. criminal charges and pay hundreds of millions of dollars in penalties over allegations it violated U.S. laws that restrict sale of U.S. technology to Iran, a person familiar with the matter said.

According to a preliminary deal which has been signed with Siemens,various types of transformers will be produced in a joint firm, based on the German engineering giant license, to be sold inside and outside of Iran, Arsalan Fathipour,

France has called for “normalization” of banking ties with Iran to improve economic relations between the two countries.

The General Command of the Army and Armed Forces announced on Thursday that units of army re-established control over the city of Tadmur (Palmyra) after inflicting heavy losses upon ISIS terrorist organization in personnel and equipment.

The United Nations special envoy for Syria concluded Friday a marathon round of talks in Geneva with an agreement from the conflicting parties to pursue further talks on a political transition to end the six-year war.

The Syrian army lost contact with a jet performing a reconnaissance mission near the Turkish border, local media said Saturday.

A political context larger than that of films themselves swept Iran’s “The Salesman” into the limelight and effectively solidified its win in the best foreign language category at the Oscars on Sunday. Iranian astronaut Anousheh Ansari accepted the award on behalf of director Asghar Farhadi, who was absent from the ceremony in protest of Donald Trump’s travel ban.

Iranian recurve athlete Zahra Nemati has been elected as the best female Para archer of the year 2016.

Islam will replace Christianity as the most popular religion in the world after 2050, says a study conducted by Pew Research Center.

Flick through almost any travel magazine these days and you’re bound to come across an article hailing Iran as the next big destination.

President Hassan Rouhani had hailed sports as a parameter of national glory especially in international competitions.