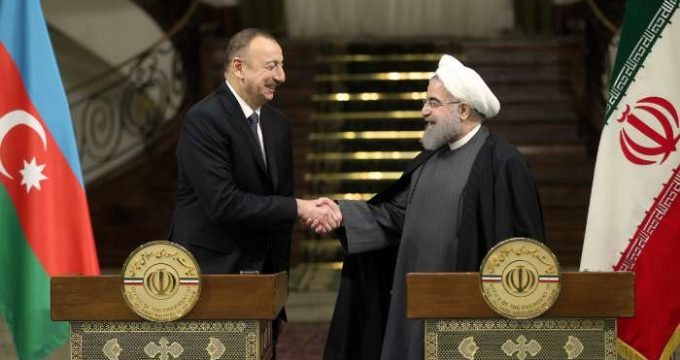 MNA – President Rouhani, while underlining that Iran-Azerbaijan ties have witnessed considerable progress, said the two countries share significant similarities on the issue of Syria.Speaking at the joint press conference with his Azerbaijani counterpart Ilham Aliyev in Tehran on Sunday, Rouhani Stressed that dialogue is the ultimate way to solve issues in the region including Syrian and Karabakh.

Pointing to the expansion of political and economic relations between Baku and Tehran, Rouhani said the trade volume within 10 months of the current year shows that the two countries are moving towards more advancement in ties.

President highly regarded the importance of transit to raise transactions between the two countries and said “important steps have been taken regarding Astara-Astara railway line project to develop South-North transit,” adding Azerbaijan will participate in developing Rasht-Astara railway project, as well.

He pointed to the joint ventures between the two countries especially in the field of car manufacturing, expressing hope joint economic projects would come to fruition soon.

Referring to the fact that both countries are bordered along the Caspian Sea, President Rouhani said the relations between two countries are important as both are concerned over Caspian Sea pollution and environmental issues. “One of the issues agreed upon between the two delegations was the legal status of the Caspian Sea and we hope to decide on the issue through consensus by all the five littoral states.”

Pointing to the regional issues, Rouhani said terrorism is emanating from Wahhabism and Salafism, while noting that the idea of regional terrorism must be dried ad infinitum.

Iran and Azerbaijan, Rouhani said, have common views on issues of Syria and Iraq; “the meeting stressed the importance of Iran, Russia and Turkey’s efforts in solving the Syrian crisis and that these efforts will be continued to achieve the final results.”

“Iran respects territorial integrity of all states and the regional issues have to be solved through political means and dialogue; we hope Nagorno-Karabakh issue, either, reach a final via negotations,”Rouhani concluded.