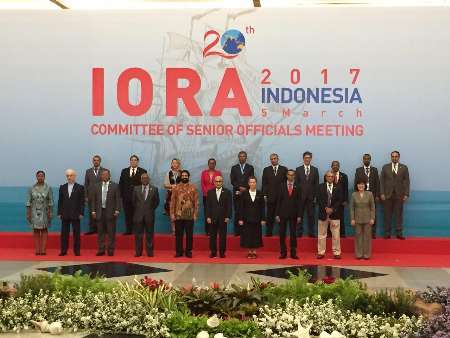 IORA, an international body founded in 1997, consists of 21 Indian Ocean’s coastal states including Iran. As a regional forum, IORA aims to promote cooperation and closer interaction among the member countries.

According to the iora.net, Leaders’ Summit in commemoration of the 20th Anniversary of IORA and its related meetings are slated for March 5-7.

IORA is working for three days under the theme of ‘Strengthening Maritime Cooperation for a Peaceful, Stable, and Prosperous Indian Ocean’.

During the IORA 2017 meetings in Indonesia, important issues including maritime security, trade, investment and management of fisheries will be discussed.

IORA 2017 brings together the leaders of the 21 IORA member countries and its 7 Dialogue Partners.

Director General for Indonesian Foreign Ministry’s Asia Pacific and African Affairs Desra Percaya says that his country as the current president of IORA is seeking cooperation between the Indian Ocean littoral states.