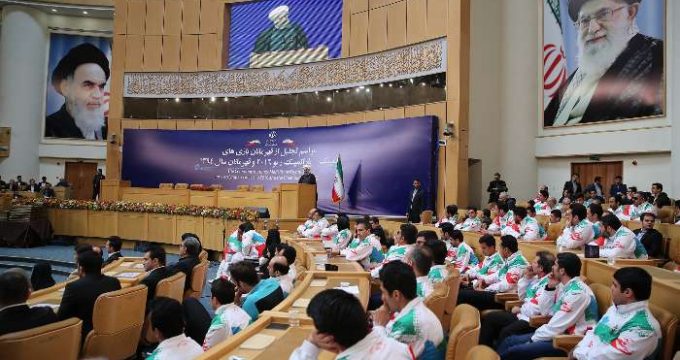 Rouhani addressed a ceremony to honor the 2016 Rio Olympics and Paralympics; “sports belongs to no particular individual, ethnicity or religion, and all Iranians are affected equally by wins by Iranians in the field,” Rouhani noted, adding that his government deemed sports as a national issue.

A nation, Rouhani underlined, “needs movement for progress and a ‘basket of hope;’ It is a part of basket of hope when your art, movies, music and sports shine at the global and regional level.”

He also pointed to the improvements in women’s presence in the international scenes and scoring sports success; “Iranian women have made remarkable achievements in various fields of sports in international and domestic events, that is, women’s sports have found the right route to achieving more successes.”

Rouhani underlined that the women athletes had been both promoters of Iranian culture and of national power and capability in sports, adding that Islam is a religion that brings together the men and women.

“Unity comes along with sports, and it is a source of national pride and national unity for us,” Rouhani said. “Our economy is associated with sports; part of our sports is sports economy; it can bring sports tourism; it can fight with Iranophobia and create dialogue and interaction with the world.”

On the issuance of visas for US freestyle wrestlers to join World Cup in Kermanshah, despite Washington’s ban on travelers from seven Muslim-majority nations, including Iranians, Rouhani said “you humiliated the US; they were received warmly in Iran; the world will admire Iranians’ hospitality and magnanimity.”

No less important was Rouhani’s allusions to restrictions on women voiced by the specific conservative circles; “women should not be limited to their homes; you see that our girls in the Olympics and other events perform excellently and win medals along with upholding their Islamic identity and culture; the number of women athletes who cheered the population would be many and they should receive their deserving attention and recognition; in sports, our athletes usually observe the religious ceremonies and the lamentation that sports would defile our religious piety is a myth since during sports events, the rituals are observed to the full,” he emphasized.