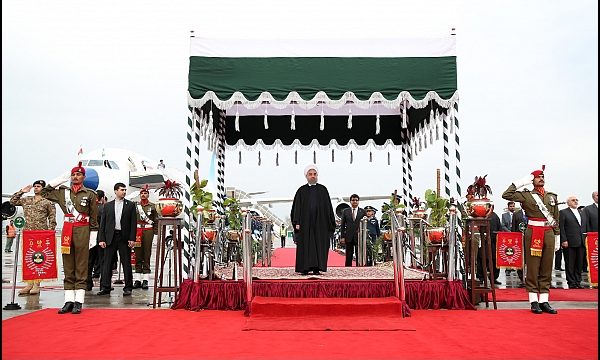 IRNA – President of Islamic Republic of Iran Hassan Rouhani has arrived in Pakistan on Tuesday evening to attend the 13th Meeting of the ECO Heads of State/Government on 1st March 2017.

The Iranian president is also scheduled to meet a number of participating heads of states on the sidelines of the Summit.

This is President Rouhani’s second visit to Pakistan as the president of Iran in less than one year. He is accompanied by a high level delegation comprising ministers and senior officials.

Analysts say that the visit of Rouhani will further deepen the existing fraternal ties between Iran and Pakistan.

The ECO Summit is expected to review the state of affairs of ECO in the light of the new and emerging global and regional circumstances and agree on the course of actions ECO should follow in expanding regional economic cooperation among its member states. The new ECO Vision 2025 is also expected to be adopted in Islamabad meetings.

The last ECO Summit was held in October 2012 in Baku.