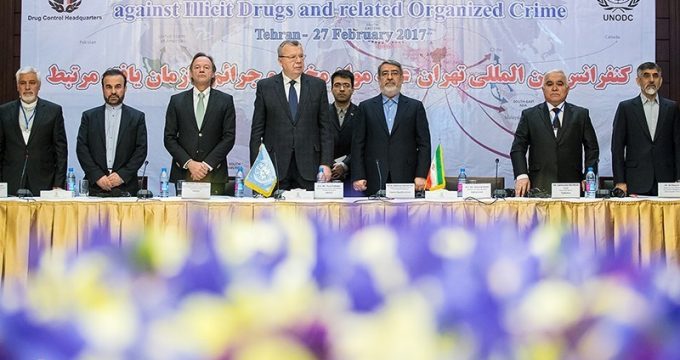 FNA- Iranian Interior Minister Abdolreza Rahmani Fazli voiced his satisfaction in the outcome of the Tehran International Conference on Cooperation against Illicit Drugs and Related Organized Crimes which wrapped up in the capital on Monday.

“As the recent conference has been successful, Iran is ready to host similar conferences in the field of fight against drugs trafficking,” Rahmani Fazli said on Tuesday.

The Iranian interior minister reiterated that the sum up of talks were comprehensive and appropriate.

In relevant remarks on Monday, Executive director of the United Nations Office on Drugs and Crime (UNODC) Yury Fedotov in a meeting with Iranian Foreign Minister Mohammad Javad Zarif in Tehran lauded the Islamic Republic’s efforts in anti-narcotics campaign.

“Iran has always been flag-bearer in this field; we should boost our cooperation in this area by joining hand,” Fedotov said.

“About 75 percent of the world’s narcotics seizures take place in Iran and we are aware about the importance and difficulties of this issue,” he added.

Zarif, for his part, said that the failure of the western countries in preventing drug trafficking is an important issue.

The Iranian foreign minister, meantime, warned against the politicization of anti-drug campaign.

In mid-December 2015, Iran and the UNODC signed a cooperation pact on campaign against drug trafficking.

The pact was signed by Rahmani Fazli and Fedotov in a meeting in Vienna.

In February 2015, Fedotov voiced the UN body’s pleasure in the unparalleled efforts made by Iran in its massive campaign against drug trafficking all throughout the past decades.

“No country in the world can compete with Iran when it comes to the amount of the narcotics discovered and seized,” Fedotov told reporters on the sidelines of an international meeting on anti-drug campaign.

He noted that UNODC and Iran are planning further mutual cooperation in the fight against narcotics, and said, “The UNODC and Iran will finalize a five-year anti-drug plan in the next two months.”

Fedotov said after holding meetings with senior Iranian anti-drug officials, the UNODC has prepared a list of the equipment needed by Iran, but the country could not have supplied them due to the western sanctions.

“After being finalized, the list will be reviewed in an upcoming meeting of the UNODC in New York and we will try to supply Iran with the needed equipment,” the UNODC executive director promised.