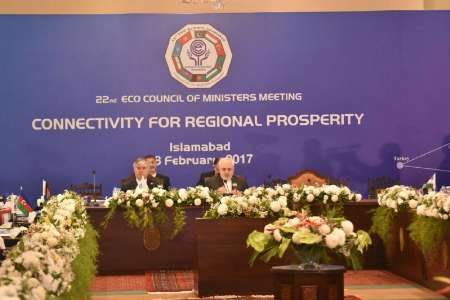 IRNA – 22nd meeting of the ECO Council of Ministers started in Pakistan’s Islamabad on Tuesday.

Earlier Zarif while speaking to reporters upon his arrival in Islamabad said (ECO) provides a unique platform for all of its member states and regional countries to engage in cooperation.

‘We hope that during the chairmanship of Pakistan which will begin by the upcoming Summit in Islamabad, we can move the process of cooperation and integration among the countries of the ECO region and even further and enhance cooperation among them to a greater extent.’

The council is expected to decide the ECO’s vision 2025; including the core principles of development, sustainability, regional integration and achieving a conducive environment for people of the region to realize their potential.

The 21st Meeting of the ECO Council of Ministers was held in Tehran on 26 November 2013.