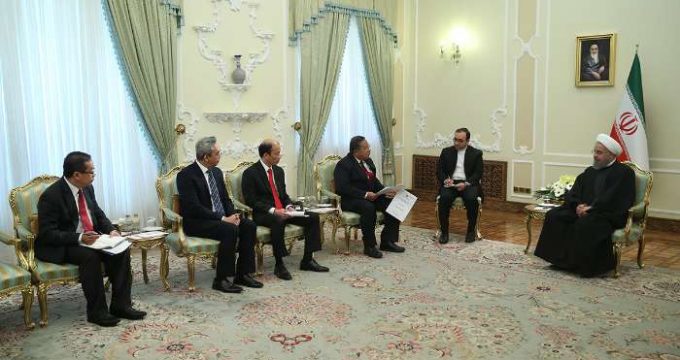 According to a by the Presidential Office, President Rouhani made the remarks in meeting with visiting special envoy of Indonesian president, who is also Coordinating Minister for Economic Affairs, Darmin Nasution.

President Rouhani called for prompt implementation of agreements previously signed between Tehran and Jakarta voicing readiness of the Iranian companies to participate in development projects of Indonesian refineries as well as electricity and road construction projects.

The president also welcomed Indonesia’s willingness to invest in Iran’s energy sector and increase imports of oil and gas from Iran.

The level of Iran-Indonesia relations, particularly in the field of economic activities, should develop more than before considering capabilities and potentials of the two countries, said the President.

He added that Indonesia is ready to invest in Iran’s oil fields and is willing to participate with the Iranian companies in construction and development projects for oil refineries in Indonesia.

Nasution said that the Central Banks of Iran and its Indonesian counterpart have reached good agreements for banking interactions.

He added that Jakarta also wants to increase its oil and gas imports from Iran.