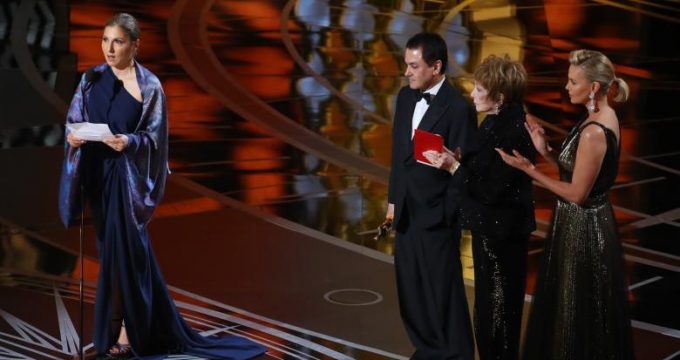 AP|Nasser Karimi: Iranians on Monday cheered the choice of one of their own for best foreign film Oscar, lauding director Asghar Farhadi’s boycott of the Hollywood ceremony for his film “The Salesman” as an act of defiance against the Trump administration’s executive order.

Farhadi refused to attend the Academy Awards, announcing after the temporary U.S. travel ban was initially imposed last month for citizens of seven Muslim-majority countries that he would not attend the ceremony – even if an exception was made for him. Iran was one of the seven countries affected by the measure, which has since been blocked from being carried out by a federal court ruling.

“The Saleman” – about a couple performing Arthur Miller’s “Death of a Salesman” and their attempts to find peace and justice after the wife is attacked at their Tehran apartment – had become a rallying cry for immigrant rights after the travel ban.

The six nominated directors in the foreign language category had put out a joint statement ahead of the award decrying what they called the climate of “fanaticism” in the United States and dedicating the award to the promotion of “unity and understanding” regardless of who won.

It was the second Oscar for Farhadi. His film “A Separation” won in the same category for 2012.

Iranian Foreign Minister Mohammad Javad Zarif said he saw the prize as taking a stance against Trump’s executive order. “Proud of Cast and Crew of “The Salesman” for Oscar and stance against #MuslimBan. Iranians have represented culture and civilization for millennia,” he tweeted in English.

State radio and television briefly reported on Farhadi’s win, which Tehran film daily Banifilm ran an op-ed saying that Trump had “probably never imagined what contribution the travel ban would have for Farhadi’s film.” The trade paper said the executive order had likely propelled “The Salesman” to victory.

Trump’s victory has prompted concern among many in Iran, particularly in the wake of a 2015 nuclear deal with the U.S. and other world powers that led to the lifting of crippling economic sanctions. The Trump administration earlier this month said it was putting Iran “on notice” after it test-fired a ballistic missile.

Many Iranians learned of the Oscar win from social media.

“I am proud of this,” said Mahbod Shirvani, a 19-year-old music student said outside the campus of Tehran University. “It shattered the U.S president’s stance on Muslim nations. It showed that American people and artists are against Trump’s policies.”

Davood Kazemi, 21, who studies painting, said the “award showed Trump cannot stop international figures and he cannot thwart artists’ solidarity that has formed, regardless of race, nationality and religion.”

In a statement read out at the ceremony on his behalf by Anousheh Ansari, an Iranian-American astronaut, Farhadi said the empathy filmmakers can foster is needed today more than ever. Ansari was joined onstage by another accomplished Iranian-American, Firouz Naderi, a former NASA director.

“I’m sorry I’m not with you tonight,” Farhadi’s statement read. “My absence is out of respect for the people of my country and those of other six nations who have been disrespected by the inhumane law that bans entry of immigrants to the U.S.”

“Dividing the world into the ‘us’ and ‘our enemies’ categories creates fear,” it said.