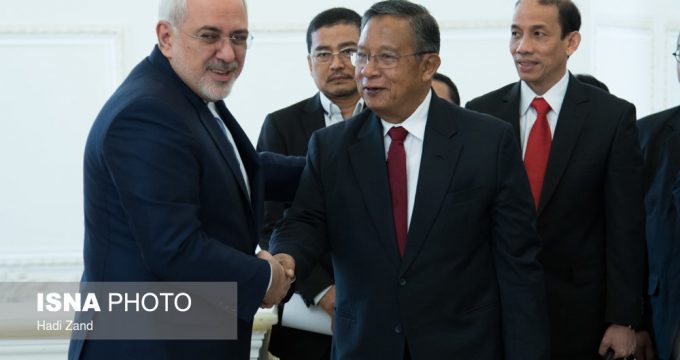 In a meeting with Indonesia’s Coordinating Economic Minister Darmin Nasution in Tehran on Monday, Zarif highlighted the existing good relations between the two nations in the spheres of culture and politics.

He, however, said that the two countries need to further strengthen their bilateral ties in the field of economy.

Nasution, too, called for the expansion of bilateral economic cooperation, expressing the hope that economic relations between the two countries would reach an acceptable level in the near future.

During the meeting, the two sides also exchanged views about ways to promote collaboration between the Iranian and Indonesian governments to encourage investment in the sectors of oil, gas, technology, banking and finance, and tourism.

Back in December, Iranian President Hassan Rouhani and his visiting Indonesian counterpart Joko Widodo, signed a mutual legal assistance treaty, an extradition treaty, and two MoUs, one on cooperation in the electricity industry and renewable energies, and the other on efforts to encourage investment.