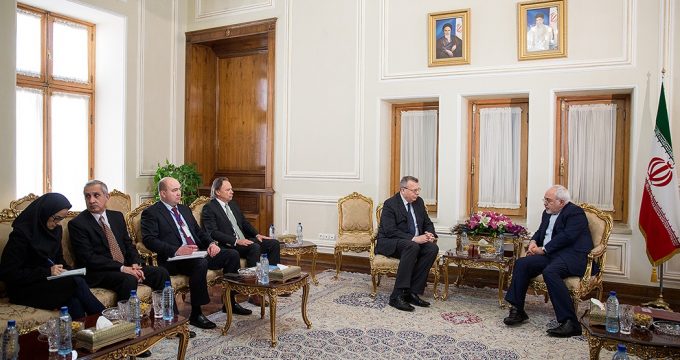 Yuri Fedotov, Executive Director of the United Nations Office on Drugs and Crime (UNODC), attended a meeting with the Iranian Minister of foreign Affairs Mohammad Javad Zarif in Tehran on Monday morning.

Zarif told UN official that Iran had been suffering loss of police staff and financial resources in fighting drug trafficking; “the social evils emanating from drugs hit the communities where the government had been working to alleviate the pernicious effects of cartels distributing drugs among the public,” he added.
“Other countries benefit from our fight against cartels, which blocks the flow of drugs to these countries; they should accept their fair share of responsibility and pay for this fight,” Zarif told the meeting.

Mr. Yury Fedotov Executive Director of the United Nations Office on Drugs and Crime (UNODC) and Director-General of the United Nations Office in Vienna (UNOV) for his pat hailed Iran’s contribution to international fight against cartels; “Iran discovers and seizes 75 per cent of the world’s total of drugs; we cherish Iran’s role and admit that the mission is difficult and costly; UNODC’s program in Iran is among the region’s most stable and the country is a pioneer in contributing positively to the advancement of the program; we should work with Iran more effectively and help the country to address crimes associated with drugs,” he told Zarif.