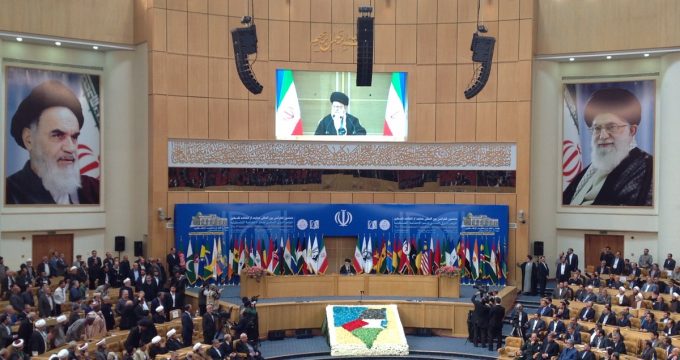 The 6th International Conference in Support of the Palestinian Intifada (Uprising) has opened in the Iranian capital, Tehran.

Iran’s Islamic Revolution Guards Corps (IRGC) has unveiled a new model of anti-helicopter mines during its recent military drills that were held in the eastern and central parts of the country.

Delegations from Tehran and Riyadh held the first round of talks about conditions for the dispatch of Iranian nationals to Saudi Arabia for Hajj pilgrimage later this year.

The U.N. agency tasked with monitoring Iran’s nuclear deal with six world powers has issued a report that indicates Tehran is honoring its end of the deal.

Iran becomes head of Group of 77

Islamic Republic of Iran in a Friday ceremony has officially become head of the Group of 77.

According to a report by IFP, the sixth International Conference on Palestine Intifada was held in Tehran on February 21 and 22. Attended by more than 700 participants from 70 countries, the two-day conference was kicked off with a speech by Ayatollah Seyyed Ali Khamenei, the Leader of Iran’s Islamic Revolution.

Foreign film Oscar nominees decry ‘climate of fascism’ in US

The six directors whose films are nominated for best foreign language film at the Oscars decried the “climate of fascism’ in the U.S. and other countries, in a joint statement two days before the Academy Awards.

Iran’s Police ready to ensure ‘Calm’ election day in May: Police chief
Iranian Police Chief Brigadier General Hossein Ashtari highlighted his forces’ vigilance and preparedness to ensure the security of the country’s upcoming presidential election and said every necessary step should be taken for having a “calm” election day.

Iran has exported an average of 450,000 barrels/d of petroleum products in the first 10 months of the current calendar year which began on March 20 2016, a senior energy official said.

U.S. prosecutors are pushing forward on an Iran sanctions investigation that had languished during the multiyear period when Washington and Tehran were negotiating their nuclear pact, according to people briefed on the matter.

Expensive oil not to benefit OPEC members in mid-term: Iran

Too expensive crude oil does increase revenues of the Organization of the Petroleum Exporting Countries (OPEC) but would ultimately damage their economies because the rivals will increase output at high oil prices, Iranian Minister of Petroleum Bijan Zangeneh said.

Iran’s RISECO and MECAPLAST of France signed a joint venture in a situation that 30-percent exports condition will be implemented for a spare part contract.

The closing statement of the sixth International conference “To support the Palestinian Intifada” held in Tehran stressed that the US administration’s intention to move the Zionist entity capital into Al-Quds [Jerusalem] must draw a response from the Arab and Muslim states by closing their embassies in the United States.

One of the most important points about Syria’s developments is the mutual influence that crisis and the Israeli regime exert on each other. The available evidences and reports show that the Israeli regime has played an essential role in supporting terrorist groups fighting against the Syrian government and the Axis of Resistance in general.

Iranian Foreign Minister Mohammad Javad Zarif described joint efforts by Iran, Russia and Turkey for peace in Syria as a useful experience, hoping that it would lead to neighboring countries’ realization of the benefits of interaction.

The Syrian government delegation at peace talks in Geneva told the United Nations on Saturday that it wanted opposition groups to condemn an attack on security forces earlier in the day, saying that otherwise they would be considered terrorists.

Leader of the Islamic Revolution Ayatollah Seyyed Ali Khamenei has called on Iranian officials to immediately address the problems facing residents of the southern Khuzestan Province, who are grappling with difficulties caused by natural phenomena.

The first robotic complex in Iran housing a number of domestically-built intelligent waiter robots capable of interacting with humans is set for launch in the near future.

Iranian director sends video to message to US rally

An Oscar-nominated Iranian film director has sent a video message to a rally attended by celebrities and top talent agents. It’s intended to thank the Hollywood community for its support during his boycott of the awards ceremony.

An Iranian company has launched luxury train tours of the country geared toward foreign tourists.