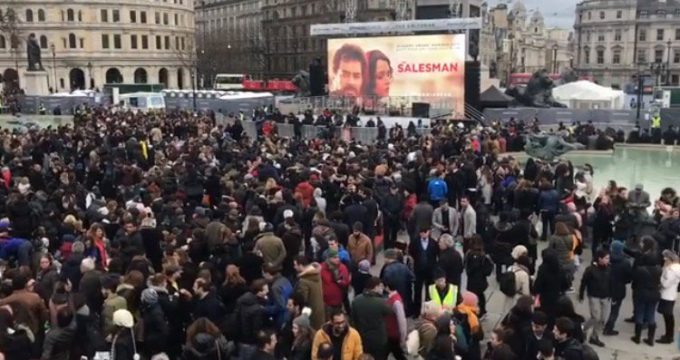 The New Arab– Thousands of film aficionados are expected in London’s Trafalgar Square on Sunday for a free screening of The Salesman by Iranian director Asghar Farhadi, who is boycotting the Oscars over US President Donald Trump’s policies.

On the afternoon before the Academy Awards ceremony in Los Angeles, where The Salesman is in contention for Best Foreign Language Film, the central London landmark will become a giant open-air cinema for the 4.30pm showing.

“I am attending to show some solidarity with the film maker and the countless other people who’ve been denied entry to Trump’s America,” said film buff Laoise in London. “It’s a rejection of the hate that the Trump administration is fostering, and I’m also excited to watch a great film.” 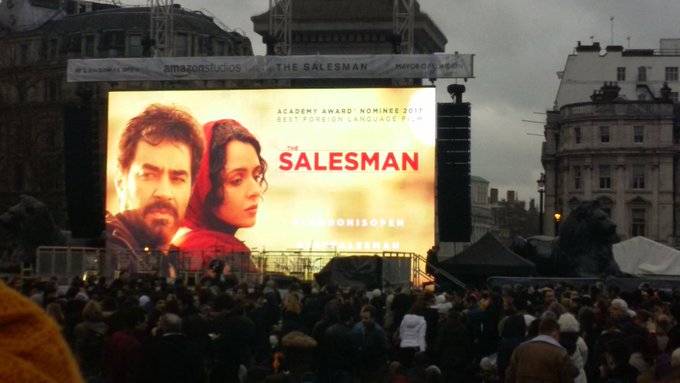 The Iranian filmmaker is refusing to attend the Oscars in protest at Trump’s executive order banning visitors from seven Muslim-majority countries.

“It will be a great opportunity to showcase how London is an international hub of creativity and a global beacon for openness and diversity,” said London mayor Sadiq Khan, who will give a speech before the screening.

Farhadi thanked Khan and the cinema community “for this generous initiative”, adding he appreciated “this invaluable show of solidarity.”

“The gathering of the audience around ‘The Salesman’ in this famous London square is symbolic of unity against the division and separation of people,” he told the Guardian.

Farhadi announced last month that he would not attend the ceremony even if the US government gave him special permission to travel despite coming from Iran, one of the countries on Trump’s controversial list.

The Iranian filmmaker stuck by his decision even after a US court ruled against the travel ban.

According to the London mayor’s office 10,000 spectators are expected for the screening, which will be the British premiere of the film.

British director Mike Leigh is also expected to speak before the screening, followed by a mini concert by The Orchestra of Syrian Musicians.

Around fifty film personalities, including Ridley Scott, Kiera Knightley, Terry Gilliam, Glenn Close, and Julie Christie, signed a letter asking that the film be screened in front of the US Embassy in London.

“We wish to hold an event in solidarity with Mr Farhadi himself, but crucially, with the many thousands of innocent people who will now be negatively impacted and harmed by a policy of outright discrimination such as this,” they wrote.