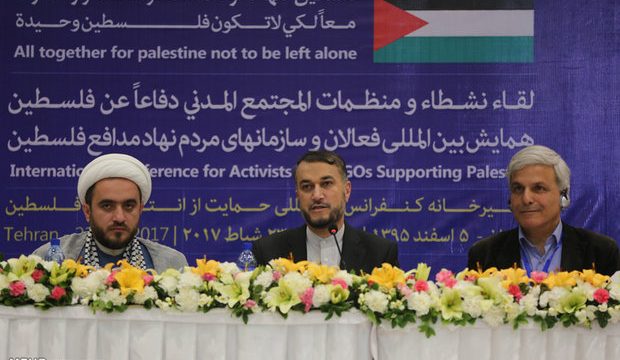 MNA– Iranian Parliament’s Director General for Foreign Affairs stressed that creating any safe zones in Syria is a total disrespect for the country’s sovereignty and is a violation of its territorial integrity.

Hossein Amir-Abdollahian made the remarks on the sidelines of his meeting with representatives of international non-governmental organizations supporting Palestine and Resistance on Friday at the Parsian Esteghlal International Hotel in Tehran.

He went on to add, “the US and the Zionist regime are in fact planning to create safe zones for those terrorists who have been driven out of Iraq, Damascus and Aleppo. They have no consideration and concern for the Syrian people.”

US President Donald Trump reiterated his plan for creating safe zones in Syria on Sunday, saying it would be good to create places for civilians in war-torn countries “so they can stay there and live safely” instead of coming to the US. Russia has said it is ready to consider the proposal, as long as it “takes into account the real situation on the ground in Syria” and is “agreed upon by the Syrian government.”

A fresh round of intra-Syrian talks was launched on Thursday, bringing together representatives of the Syrian government and opposition groups. The Geneva talks follow the talks that concluded in the Kazakh capital, Astana, last week and resulted in an agreement between Moscow, Tehran and Ankara on the establishment of a trilateral mechanism to monitor the ceasefire in Syria.