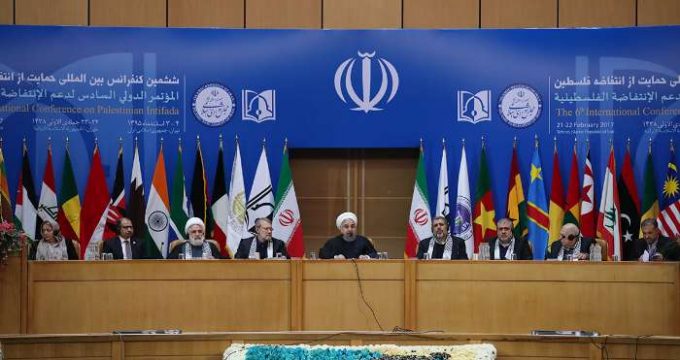 Tasnim – Iranian President Hassan Rouhani described the Palestinian issue as a deep wound in the body of the Islamic Ummah and an embarrassment for the international community and some Muslim states.

The Palestinian issue “is not a problem of a people or a nation but is a sign of injustice and oppression and disregard for international law and inefficiency of international bodies on the one hand, and a symbol of continued endeavors of a nation to restore their rights,” the president said Wednesday while addressing the 6th International Conference on Palestinian Intifada (uprising) in Tehran.

It is also a “disgrace for the international community and a shame for certain Islamic countries,” he added.

Rouhani further referred to the chaotic situation in the region today and the atrocities committed by violent and extremist ideologies in the name of religion while some Muslim governments, instead of cooperating to put an end to conflicts and blind killings, play blame games against one another, saying that the winner of such a deplorable situation is the Zionist regime of Israel.

“Today, the Zionists see a historic opportunity in the wars and internal disputes among Muslims,” he said.

The Iranian chief executive urged regional countries to be vigilant against the Tel Aviv regime’s attempts to spread a fear of the resistance movement now that Palestine’s resistance has managed to attract the sympathy of a significant part of the world public opinion.

The 6th International Conference on Palestinian Intifada, kicked off in Tehran on Tuesday with around 700 foreign officials and intellectuals, including 18 parliament speakers, in attendance.

Leader of the Islamic Revolution Ayatollah Seyed Ali Khamenei was the keynote speaker at the opening session of the gathering.