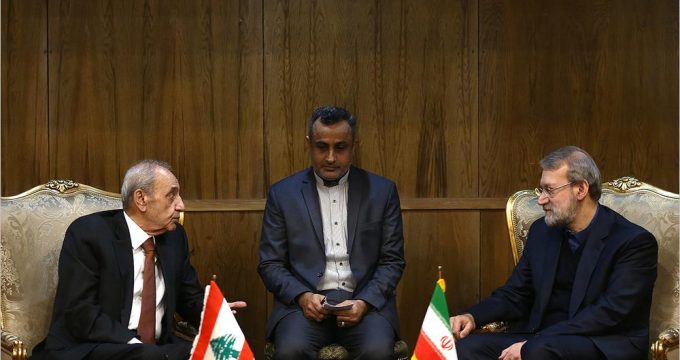 “In the current situation with regard to international developments, unity and solidarity of Muslim countries are of great significance,” Larijani said in a meeting with Speaker of Lebanon’s Parliament Nabih Berri in Tehran on Wednesday.

The Iranian parliament speaker emphasized that at the current juncture, supporting the Palestinian cause is also highly important and all Muslim countries should move in this direction.

For his part, Nabih Berri, who is in Iran for an international conference on Palestine, expressed his gratitude to Iran for holding the conference.

He also said that the Islamic Awakening movements in the region begin with the Palestinian issue and that all should defend the cause of Palestine.

The meeting was held on the sidelines of the 6th International Conference on Palestinian Intifada, currently underway in Tehran with around 700 foreign officials and intellectuals, including 18 parliament speakers, in attendance.

Leader of the Islamic Revolution Ayatollah Seyed Ali Khamenei was the keynote speaker at the opening session of the gathering.

In his speech, Imam Khamenei said the third Palestinian intifada (uprising) will begin a very important chapter in the history of the Palestinian nation’s fighting and will inflict another defeat on the Zionist regime of Israel.

In recent years, the concept of resistance has attracted a great deal of attention across the Muslim world.

It refers mainly to the courage and fortitude shown by the people of Palestine, who have withstood Israel’s crimes for years.