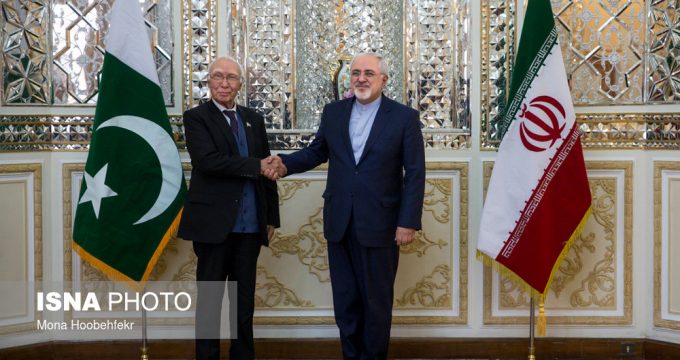 In a meeting with Iranian Foreign Minister Mohammad Javad Zarif in Tehran on Tuesday, Aziz extended his appreciation for the Islamic Republic’s expression of sympathy over the recent terrorist attacks in Pakistan.

He added that Pakistan has adopted measures to prevent the recurrence of such terrorist incidents.

Multiple terrorist attacks have rocked Pakistan over the past few days.

More than 70 people were killed and over 150 others injured in a huge bomb explosion at a shrine in the town of Sehwan in Sindh Province on February 16. The Daesh Takfiri group claimed responsibility for the attack.

The terrorist incident came a day after an assailant riding a motorbike attacked a van transporting a judge in the city of Peshawar. The driver of the van was killed and five people, including the judge, were injured.

The Peshawar attack came hours after two bombers hit a government compound in the tribal area of Mohmand near the Afghan border. At least three policemen and two passers-by died in the attack.

On February 13, a deadly bombing rocked Lahore, the capital of Punjab Province, killing over a dozen people.

The Pakistani Taliban faction Jumaat-ul-Ahrar claimed responsibility for the attacks in Lahore and Mohmand.

The Pakistani foreign minister further threw his country’s weight behind the acceleration of the implementation of joint economic projects with Iran.

The Iranian foreign minister, for his part, said regional countries must increase dialogue and develop understanding to remove tensions and confusions.

He added that Iranian President Hassan Rouhani recently paid a visit to two important countries in the Persian Gulf in line with the Islamic Republic’s efforts to enhance understanding among regional countries to help solve crises in the region.

President Rouhani paid a day-long visit to Oman and Kuwait on February 15 to boost cordial relations.

“The visits, which took place at a time when the region is in special and sensitive circumstances, indicate the countries’ common will to expand friendly ties across the strategic waters of the Persian Gulf,” Iranian Foreign Ministry Spokesman Bahram Qassemi said on Thursday.

“It is expected that such relations would be strengthened and the implementation of projects accelerated through joint efforts so that the two countries would witness even greater development of economic relations, which are beneficial to the two states and the region as well,” the top Iranian diplomat added.

The Iranian and Pakistani foreign ministers also discussed the latest developments in the region, ways to counter al-Qaeda and Daesh terrorist groups, the situation in Afghanistan and trilateral cooperation among Tehran, Islamabad and Kabul.