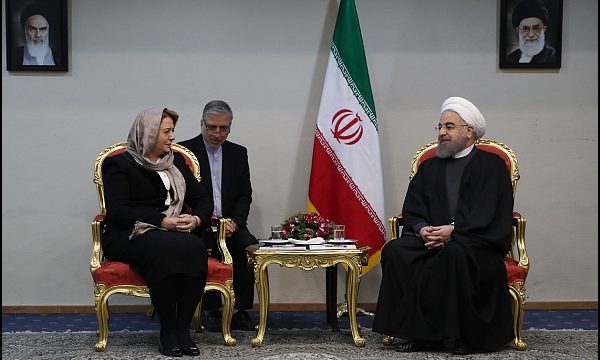 MNA – President Hassan Rouhani said Iran’s support of the Syrian nation will continue until final victory if achieved.The Iranian President made the remarks at a meeting on Wednesday morning in Tehran with Parliament Speaker of the People’s Assembly of the Syrian Arab Republic Ms. Hadiyeh Khalaf Abbas.

Rouhani extended congratulations on recent victories of Syrian people against terrorists stating “in the past months, positive developments have been observed in Syria as evidenced by the change in views of world governments who are bound to succumb to realities of Syria.”

“Like always, Iran will remain on the side of Syrian people in the fight against terrorism and upcoming peace talks,” he continued.

The senior Iranian official, while referring to difficult and tough conditions experienced by Syrians, reiterated that Syria’s support of the Palestinian cause partly explains the pressure imposed against people of Syria in recent years.

“Syria has always led the frontier of Resistance which explains high pressures against its people,” noted Rouhani.

Iran’s President deemed establishment of peace and stability in Syria to the benefit of Palestine and the region asserting “Palestine remains as the most significant issue in the Islamic world and we hope the 6th International Conference on Palestinian Intifada will mark a major step towards resolving regional issues.”

Speaker of People’s Assembly of Syria Khalaf Abbas, for her part, conveyed warm greetings of the Syrian government and people to President Rouhani saying “the people of Syria appreciate generous supports of Iran in the absence of which no victory would have been obtained.”

She pointed to the importance of coordination between Tehran and Damascus in the fight against terrorists adding “bilateral coordination will offer fruitful and positive outcomes as Syrian issues have taken up constructive approaches as regards political and military dimensions.”

On holding of the Conference on Palestinian Intifada at present circumstances, the visiting official explained “the event will exert positive effects on backing the Palestinian cause especially at a time when several Arab and Western countries want the Palestinian issue to be overlooked.”