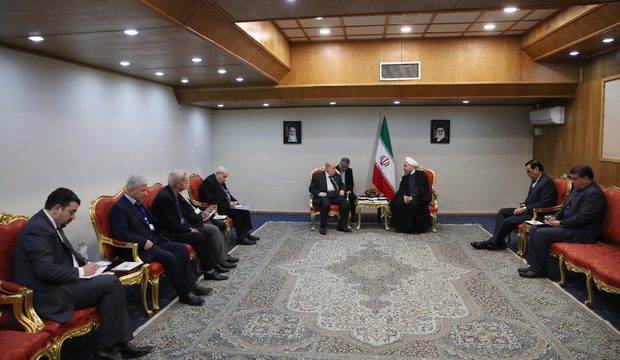 MNA – President Hassan Rouhani while noting the high price Iranian people have so far paid for their support of Palestine against Israeli occupation, said the nation is still determined to continue its unsparing support.

Iranian President Hassan Rouhani made the remarks in his meeting with Chairman of the Palestinian National Council Salim Zanoun on Wednesday on the sidelines of the 6th International Conference on Palestinian Intifada that is currently underway in Tehran with representatives of 80 countries in attendance.

President Rouhani deemed the holding of the conference an indicative of Iran’s unchanging determination for supporting Palestinian people, adding “any move in line with defending the rights of Muslim people, particularly the Palestinians, is of high importance to us.”

Salim Zanoun, for his part, hailed the successful holding of the conference by Iran, and voiced his deep appreciation for the efforts and supports of the Islamic Republic for Palestine and the Palestinian cause.

“We need to stand firm by each other and do not allow any other issue to overshadow the significant issue of the liberation of Palestine and the address of the criminal acts of the Zionist regime against us,” he said.

He went on to add, “the positions and viewpoints of participants at Tehran’s conference in support of Palestine were highly promising and encouraging.”