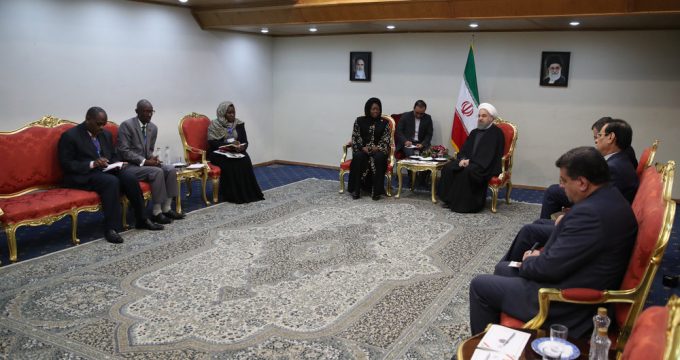 MNA – President Rouhani welcomed Iran’s deepening of relations with Jordan and Uganda, stressing that the strengthening of relations between Tehran, Amman and Kampala is for the interest of the three peoples and the region.

Rouhani made the remarks on the sidelines of the 6th International Conference on Palestinian Intifada in Tehran.

In his meeting with Jordan House of Representatives Speaker Atef Tarawneh on Wednesday, Rouhani said Iran is ready to deepen bilateral relations, consultation and cooperation with Jordan in order to strengthen stability and security in the region.

Pointing to the Palestinian issue and the importance of full support for their rights, Rouhani stressed the need for consultations, cooperation and coordination among Muslim countries to solve the problems of the Islamic world, including Syria.

He said efforts to solve the Palestinian issue, end homelessness and solve many problems of the Palestinian people, is a big responsibility on the shoulders of everyone, especially on neighboring countries.

In another meeting with Ugandan Parliament Speaker Rebecca Alitwala on Wednesday, Rouhani pointing to Zionist regime’s efforts to marginalize and forget the issue of Palestine, said everyone should declare support for the Palestinian people with a louder voice.

President Rouhani also called Iran-Uganda relations on the rise and welcoming further development of relations between Tehran-Kampala, pointed to the extensive capabilities of Iranian companies and highly regarded the presence of Iranian companies in Africa and particularly in Uganda to strengthen banking cooperation.