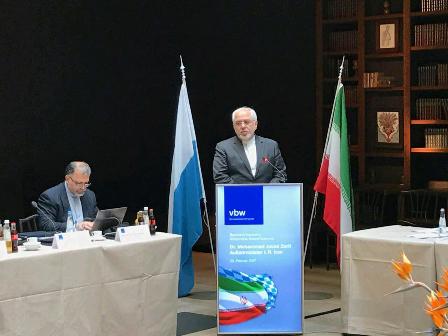 IRNA – Foreign Minister Mohammad Javad Zarif in a discussion panel in Munich expounded on Iran’s priorities in economic diplomacy as well as its megaprojects in various areas.

In the discussion panel attended by directors of big German companies, Zarif recalled historic industrial cooperation between Iran and Germany, saying that the country’s cooperation with Iran has a positive association for Iranians and the same could be said about the Germans, too.

“Europe has never suffered loss from its economic and commercial cooperation with Iran and even in times of sanctions, Iran has fulfilled all its commitments regarding the European private and state companies and it has in fact been and will be a reliable trade partner for Europe, particularly for Germany,” he said.

Asked about the rate of risk for foreign investment, Zarif said that in security and economic affairs, Iran only relies on its nation and it never seeks its development and security out of its borders. Therefore, Iran has the lowest risk for any economic cooperation compared with that of other regional states.

Economic cooperation between Iran and Europe will benefit both sides and the former should adopt an independent approach regarding Iran and not get influenced by the policies that even adveseley impact its interests, he concluded.

Zarif also welcomed establishment of Bavaria Trade and Industries Offcie in Tehran and described it as one of the effective institutes for Iran-Germany cooperation.

Zarif is currently on a visit to Germany to attend 2017 Munich Security Conference opened on Friday.