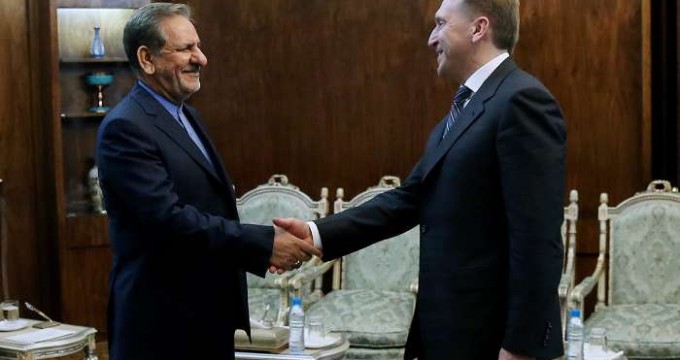 “The bilateral relations between the two countries are on an upward trend and I hope that your visit contribute to development of the relations,” said Es’hagh Jahangiri, the Iranian First Vice-President, on Tuesday while meeting with Igor Ivanovich Shuvalov, the Russian First Deputy Prime Minister, who is visiting Tehran.

Mr. Jahangiri maintained that developing bilateral, regional, and international interaction and coordination with Russia is of prime importance to the Islamic Republic of Iran. Referring to the near-to-happen visit of President Rouhani, the Iranian Vice-President voiced hope that good agreements be signed during President Rouhani’s visit to the capital city of Russia.

Igor Shuvalov, for his part, delivered the greetings of Russian President Vladimir Putin and Prime Minister Dmitry Medvedevto the Iranian officials and highlighted that the Russian president is firm in his order for expansion of bilateral ties between Iran and Russia. “After Mr. Putin’s order to boost the economy and trade relations between Iran and Russia and importing of Iranian grains to Russia and Eurasian countries, the volume of trade between the two countries has witnessed a 30% increase and a free trade zone between Iran and the countries of Eurasia can contribute the trade relations between the two sides.”

Saying that Iran and Russia are enjoining good political ties, Mr. Shuvalov called for concerted efforts to have the same level of relations in the areas of trade and economy.

“During the conversation, President Putin stressed on to-the-letter implementation of the JCPOA and his stress on this point makes it clear to the world that Tehran and Moscow are enjoying a strategic partnership,” asserted the Russian official referring to the phone dialogue between President Putin of Russia and President Trump of US.