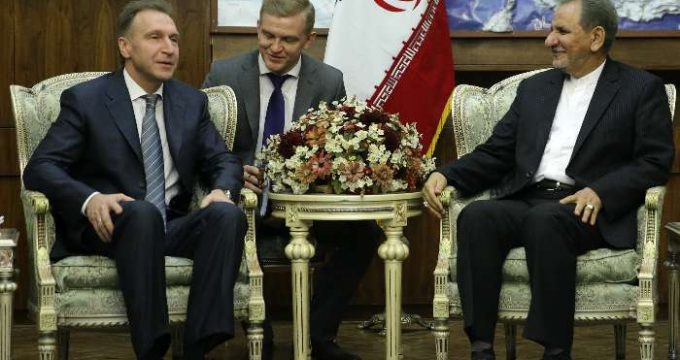 Iran to set up FTZ with EAEU

Jahangiri further told First Deputy Prime Minister of Russia Igor Shuvalov that Iran and Russia should try to upgrade their economic relations to the tune of proper political relations.

He hoped that the visit of the Russian senior official to Iran will end up in promotion of bilateral relations.

Jahangiri announced that the expansion of relations and bilateral, regional and international coordination with Russia is of paramount importance for the Islamic Republic of Iran.

Referring to the imminent visit of President Hassan Rouhani to Moscow, he hoped that the visit will result in conclusion of good agreements between the two countries.

Also pointing to joint venture projects by Iran and Russia and their cooperation for establishment of Bushehr nuclear power plant, Jahangiri said it is hoped that the documents and deals will be soon implemented.

He also referred to talks between Russian companies and the Iranian parties for their contribution into Iranian oil and energy projects and said, “We are interested that the agreements, inked by the two sides in oil and energy, will be implemented.”

He said Iran is interested in expansion of economic cooperation with the EAEU members, and said the preliminaries should be arranged for enforcement of the deal for establishment of Iran-EAEU FTZ.

Jahangiri also thanked Russia for its cooperation and role in talks with the OPEC members, which resulted in increase in oil prices, and added, “We expect Moscow to continue with its constructive stances in JCPOA so that it will be implemented in favorable manner.”

Shuvalev, for his part, said Russian president Vladimir Putin had laid special emphasis on expansion of economic relations with Iran, adding that following Putin’s order for expansion of trade exchanges and import of agro products from Iran by Russia and the EAEU states, fortunately, volume of trade rose by about 30 percent.

He announced that establishment of the FTZ by Iran and the EAEU can result in promotion of trade exchange volume.