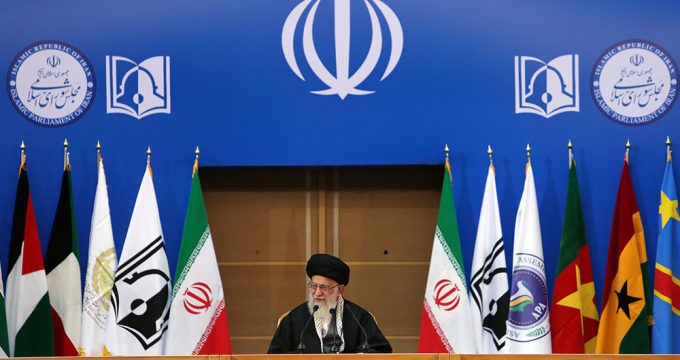 AFP – Iran’s supreme leader Ayatollah Ali Khamenei called on Tuesday for the “complete liberation” of Palestine from the “tumour” of Israel, renewing his regime’s refusal to recognise Israel’s right to exist.

Ayatollah Khamenei was speaking at the sixth international conference in support of Palestinian intifada (uprising), one of a number of showcase events the Tehran authorities organise in solidarity with the Palestinians.

“This cancerous tumour, since its start, has grown incrementally and its treatment must be incremental too,” Ayatollah Khamenei said in a speech broadcast live on state television.

“It continues to advance towards its other objectives, ultimately the complete liberation of Palestine,” he added.

He listed Israel’s withdrawal from south Lebanon in 2000 and from Gaza in 2005 as two major achievements so far.

Moderate President Hassan Rouhani, and the conservative brothers who head parliament and the judiciary — Ali Larijani and Ayatollah Sadegh Larijani — flanked the supreme leader as he spoke.

Among the guests from the 80 countries taking part in the conference were the parliament speakers of Algeria, Mali, North Korea, Lebanon and Syria, and the leader of the hardline Palestinian Islamic Jihad movement, Ramadan Shalah.

Ever since the Islamic revolution of 1979, Iran has been implacable in its opposition to Israel and has provided extensive support to Palestinian militant groups.

Ayatollah Khamenei said the most important achievement of the Palestinian “resistance” movement had been “creating a fundamental obstacle against the Zionist project… by imposing a war of attrition on the enemy”.

It had prevented Israel from implementing its “master plan of… dominating the entire region,” he said.

“If the resistance had not blocked the Zionist regime, now we would be witnessing them violating other territories from Egypt to Jordan, Iraq and the Persian Gulf, etc.”

Hardliner Mahmoud Ahmadinejad, who served as president from 2005 to 2013, famously called for Israel to be “wiped off the map”, a comment that sparked an international outcry.

Iranian officials have said the call refers to the state not the people, and underline that the Islamic republic has its own Jewish community.

But Ayatollah Khamenei’s renewed reference to Israel as a “tumour” comes as new US President Donald Trump fills his administration with appointees with hawkishly pro-Israel and anti-Iran views.

Trump’s pick for ambassador to Israel, David Friedman, has gone on the record calling on Sunni Arab states to ally with the Jewish state against Shiite Iran.

Rouhani is set to close the two-day event with a speech on Wednesday.