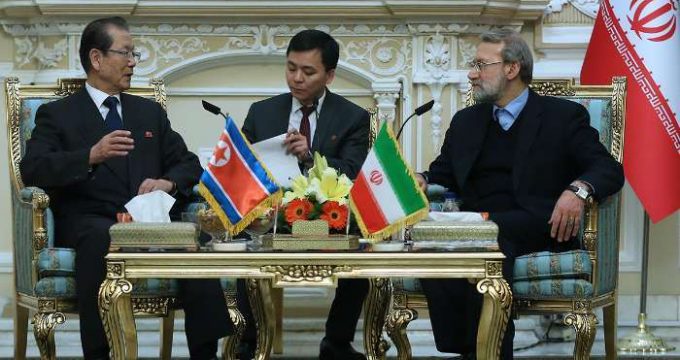 Speaker: Iran seeking to establish peace in ME, Korean Peninsula

He made the remarks in a meeting with the Chairman of Supreme Assembly of Democratic People Republic of Korea Choe Thae-bok on Sunday.

Larijani added that Tehran is against US provocative measures

“We are always seeking sustainable ties with the country,” he said.

Certainly, the issue of Palestine is a very significant one and North Korea’s presence in the event is valuable, he said.

While Americans are all the time after pressuring the independent countries and they do not want peace in the regions, Iran is pursuing establishment of peace in the Middle East and Korean Peninsula and is opposed to the US’ provocative measures, Larijani said.

The two countries economic relations are at suitable levels, but they should be further improved, he said.

Choe Thae-bok, for his part, referred to long-standing and extensive bilateral relations, saying that Iran plays a major role in upholding the objectives of the Palestinian nation, Non-Aligned Movement and developing countries.

Noting that International Conference for Supporting Palestinian Nation will be successful, he added that the Iranian government has achieved a lot of successes in the fields of economy and defense power.

Pointing to the US’ policies in the international scene, the Korean official said that the Americans have always put independent states under pressure and sanctions and enhanced ties will surely help defuse the moves.

Regrettably, the US always interferes in all countries’ internal affairs and it threatens North Korea militarily as it is an anti-American country, he said.

The official also said that his country is keen on promoting ties with Iran.

North Korea is seeking to forge unity between the two Koreas but presence of the Americans in the peninsula blocks the materialization of the issue, said the North Korean official.