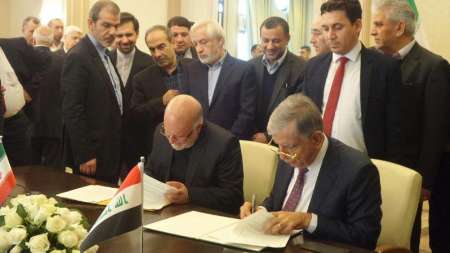 IRNA – Minister of Petroleum Bijan Zangeneh and his Iraqi counterpart Jabbar al-Luaibi signed Memorandum of Understanding (MoU) on cooperation in different fields of oil and gas here on Monday at the end of their negotiation.

Issues such as development of oil and gas fields in common borders, exporting engineering and technical services, exporting goods and cooperation in the field of petroleum and derivatives were mentioned in the MoU.

Rendering help to rebuild infrastructures of Iraq oil and gas refineries by Iran were also mentioned in the MoU.

The two petroleum ministers also reached agreement on exporting Kirkuk oil through a pipeline, which passes from Iran’s territory and it is due that an international consultant to be introduced for its technical and economic justification.

Granting university scholarships to Iraqi students to study in upstream oil and gas courses were also among other issues in the MoU.

The two sides agreed to establish a joint committee to follow up taken decisions and agreements.