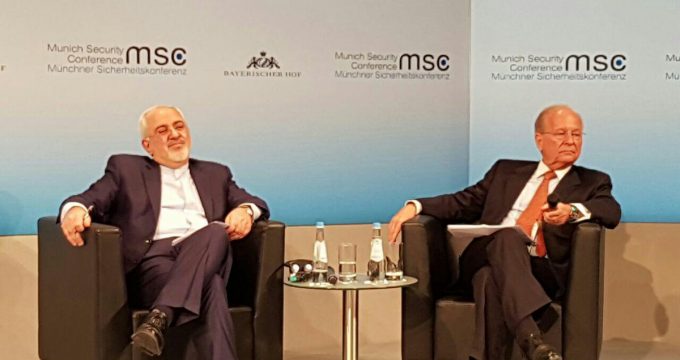 Zarif: It will take forever for Iran to produce nuclear weapons

IRNA – Foreign Minister Mohammad Javad Zarif said on Sunday that it will take forever for Iran to produce nuclear weapons because it is not going to do so.

Zarif made the remarks speaking to reporters on the sidelines of Munich Security Conference when asked how long it would take for Iran to make nuclear weapons.

Nuclear weapons would not bring about security neither for Iran nor for any other country, the foreign minister said, adding that now is the time for destroying the nuclear bombs of those possessing such weapons instead of entrance of others in the nuclear club.

Asked to comment about US President Donald Trump’s threats against Iran, Zarif said Iran will not be affected by coercion, rather it well responds to respect.

‘Everybody tested us for many years — all threats and coercions were imposed on us,’ Zarif said.

When the so-called crippling sanctions were imposed on Iran, the country had less than 2,000 centrifuges, but when the US came to the negotiating table, Iran had 20,000 centrifuges, Zarif added.

He said that NPT non-member states talk about Iran’s nuclear threat while they themselves are the biggest threat to international community.

Every mechanism is already in place to ensure the peaceful nature of Iran’s nuclear program, Zarif said.