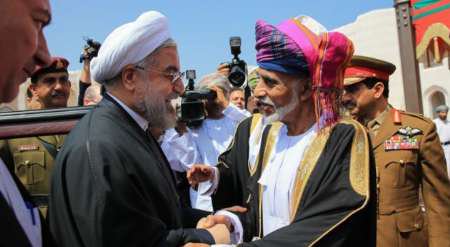 Rouhani’s visits to Oman and Kuwait: A Crack in the wall

Iranian Diplomacy- Leading a high-profile delegation, Iranian President Hassan Rouhani visited Kuwait and Oman on Wednesday, which was a first in the last two years. Rouhani’s visit came as a response to a visit made by Kuwaiti Foreign Minister three weeks ago, reportedly aimed to convey a message from the Kuwaiti Emir. The message had sparked media speculations that it contained a call for rapprochement between Iran and [Persian] Gulf Cooperation Council states.

A day before the visit, Iran’s Deputy Chief of Staff of the President for Political Affairs Hamid Aboutalebi wrote in a tweet thread that it could be the sign of an urge for friendship, Muslim fraternity, and return to close regional ties. “It could be a call to end religious differences, factional conflicts, terrorist aggression, manslaughter of the innocent, displacement of the homeless, and increasing regional tensions. It could be a beginning of an imminent end to destruction of Islamic countries, regional economy, capitals, and welfare of the countries in the region,” he added.

Official news from Rouhani’s separate meetings with Kuwait and Omani leaders confirms speculations to some extent. During his meeting with Oman’s Sultan Qaboos bin Said Al Said in Muscat on Wednesday, Rouhani said the common enemies of Islam and the regional Arab countries have been propagating Iranophobia while Tehran’s power has always served peace, according to PressTV. “Tehran has always been the harbinger of the settlement of problems and differences through dialogue, and Iran’s military might is solely defensive and supports regional security,” PressTV quoted him as saying. Touching on the conflicts in the region, including in Yemen, the Iranian president described the situation in the impoverished Arab state as “very grave” and called for serious action to address the issue.

“The Muslim countries of the region are all duty-bound to take… measures to help the oppressed people of Yemen,” Rouhani said. The establishment of a ceasefire, the delivery of humanitarian aid and intra-Yemeni talks are the key to ending the crisis in the country, he added. Sultan Qaboos, for his part, welcomed the expansion of ties between his country and Iran in the political, economic, and cultural sectors. He praised Iran’s resolve to hold amicable ties with its neighbors and promote regional cooperation, saying such a policy would serve the region’s peace and security. The Omani ruler added that the countries of the Persian Gulf region had a “prime responsibility” to restore regional security through “consultations.”

During a separate meeting with Kuwait’s Emir Sheikh Sabah al-Ahmad al-Jaber al-Sabah in Kuwait City, Rouhani stressed that the two countries have close political ties and that their economic relations must follow suit. “Iran is fully prepared for the development all-out ties, including joint investments in diverse projects, with Kuwait,” according to quotes published on PressTV. For his part, Sheikh Sabah stressed that his country is adamant to increase relations with Iran in all fields. He further thanked Iran for its positions during the “vicious” Iraqi occupation of Kuwait under Saddam Hussein, when Tehran stood by Kuwait.

Most Iranian media outlets have hailed the visit as the beginning of an end to regional differences. Referring to remarks made by Rouhani before he departed for the one-day visit to Oman and Kuwait, Iran daily, the official organ of the Iranian administration found it an endorsement of such speculations. Emphasizing that the Kuwait Emir’s message indicated the will among the six GCC members to improve ties and settle misunderstandings with Iran through dialogue, Rouhani told reporters in Tehran’s Mehrabad airport that Tehran welcomed the quintessence of the message.

Covering the one-day visit with the headline “Iran’s regional initiative warmly welcome by southern neighbors”, Iran daily highlighted the reception of President Hassan Rouhani by his Omani and Kuwait opposite numbers, as a warm reception for a president who has come to show “Iran’s resolve for dialogue”. However, in an interview with Iran daily conducted hours before the visit but published here on Thursday, Middle East pundit Mir-Mahmoud Mousavi said the message delivered was neither positive, nor negative.

“They had brought up issues and conditions that would lead us to nowhere. They had pointed out differences and proposed conditions for improved ties, which changed nothing,” he added. In response to questions on whether the recent developments could help rebuild ties between Iran and Saudi Arabia, Mousavi said the issues between the sides are deep. “A bipolarity has formed in the region to remove which require political resolve in the two capitals as well as a comprehensive plan that could bail us out of the crisis step by step,” he added. While expressing concern that the bipolarity is larger than the Arab region in scale and has grown to the Indian subcontinent, the former diplomat called for restraint on both sides, direct diplomatic contact without intervention from non-diplomats.

Pro-reform daily Etemad Newspaper covered the visit more timidly, calling the recent round of talks a small crack in the regional wall of distrust. The daily enumerated eight issues that are overshadowing the relations between Iran and GCC states. These include Donald Trump’s rise to presidency in the United States, differences over Syria, the Yemeni file, extensive security and political cooperation between Iran and Russia, ties between Israel and Saudi Arabia, Iran’s involvement in Iraq, Iran-Turkey ties, and Sunni-Shiite differences used by Riyadh to propagate Iranophobia. The paper also published an article by senior Persian Gulf expert Mohammad-Ali Mohtadi, who wrote that the real significance of Rouhani’s visits laid in the developments in Syria, Iraq, Lebanon and Yemen. He also noted that “bankrupt countries” like the UK and Turkey are determined to engage in the Persian Gulf, using Iranophobia as a pretext to swindle the Arab states. It is in this context, Mohtadi argues, that Iran’s message of peace and friendship thwarts such plots.

In another op-ed for Etemad, former Iranian ambassador to Muscat wrote what distinguishes the recent Rouhani visit to Oman from previous ones is that it has been his first after the nuclear deal. Referring to Muscat’s role in the nuclear negotiations that resulted in Joint Comprehensive Plan of Action reached between Iran and world powers, he argued that Iran must have conveyed the message that it has not forgotten it tough-times friends. He also noted that Iran’s deposit in Omani banks made during the sanctions have caused differences between certain Iranian and Omani institutions, saying high-profile visits of the kind could help ease such tensions. While calling the one-day visits by President Rouhani as one that could cut short the path to talks with the Gulf states, he argued that Iran should pursue the same method in order to reestablish ties with Saudi Arabia and Qatar, through diplomacy.

A tweet on Thursday from Rouhani’s advisor Hessamoddin Ashean also seems to be relevant. “Iran’s neighbors fear their own vulnerabilities, not Iran’s power. Iran’s thesis, i.e. ‘a stronger region instead of being the strongest in the region’, should create hope,” the tweet translates.