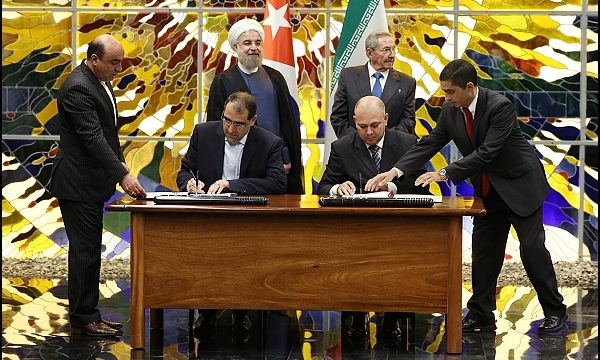 Vestnik Kavkaza: Iran and Cuba signed 12 new cooperation agreements Thursday fortifying ties at a time when U.S. President Donald Trump’s comments on Tehran and Havana have upset the two countries. The agreements have been made in areas such as agriculture, health, biotechnology and higher education. Cuban Institute of Radio and Television and Iranian network HispanTV are also reported to have entered a memorandum of understanding under the agreement. “In the political arena, we are two countries which have common positions on international issues. As non-aligned countries, we support each other mutually,” Iranian Health Minister Seyyed Hassan Ghazizadeh Hashemi said, according to TeleSur.

Memorandum of Understanding on the development of bilateral cooperation in the field of medical and pharmaceutical activities was signed by the Ministry of Health and Medical Education of Iran and the Ministry of Public Health of Cuba in September in the presence of Iranian President Hassan Rouhani and his Cuban counterpart Raul Castro. At the time, Rouhani flew to Liberty Island from Venezuela, where he participated in the 17th summit of the Non-Aligned Movement, held on September 17-18.

Strengthening of ties occurs at a time when US President Donald Trump criticizes both Tehran and Havana. Trump has threatened to make changes to the nuclear deal with Iran and put the Islamic republic officially “on notice” for test-firing a ballistic missile early this month. The 70-year-old also angered Tehran by putting it on the immigration ban list, which includes six other Muslim-majority countries.

Earlier this month, Iranian President Hassan Rouhani slammed Trump and his administration during a rally, in which some people chanted “Death to America.” “This turnout is a response to false remarks by the new rulers in the White House and the people are telling the world through their presence that the Iranian people must be spoken to with respect,” Rouhani said. “Iranians will make those using threatening language against this nation regret it. Some inexperienced figures in the region and America are threatening Iran. They should know that the language of threats has never worked with Iran,” Rouhani told the crowd at the Azadi Square. “They should learn to respect Iran and Iranians. We will strongly confront any warmongering policies.”