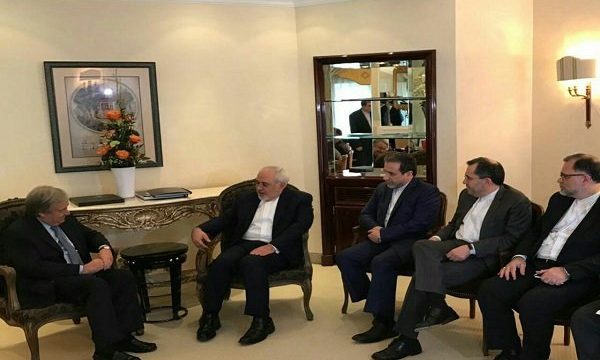 IRNA – UN Secretary General Antonio Guterres by referring to nuclear deal between Iran and Group 5+1 said that Joint Comprehensive Plan of Action (JCPOA) is an important factor in international peace and stability and announced his own and the UN support for continuation of the deal.

He made the remarks in a meeting with Iranian Foreign Minister Mohammad Javad Zarif on Saturday afternoon on the sidelines of Munich Security Conference.

Guterres welcomed invitation of Mr. Zarif to pay visit to Iran, and said that at the first opportunity he will travel to Iran.

During the meeting, different regional and international issues, including Muslims situation in Myanmar, situation in Yemen, Syria and Iraq and role of the UN were discussed.

Zarif, for his part, called for more active presence of the UN in these crises, and expressed readiness of Iran for cooperation with the secretary general and supporting his efforts.

Zarif , who is in Germany to attend the 53rd Munich Security Conference, met with a number of foreign ministers, presidents and senior diplomats from different countries.