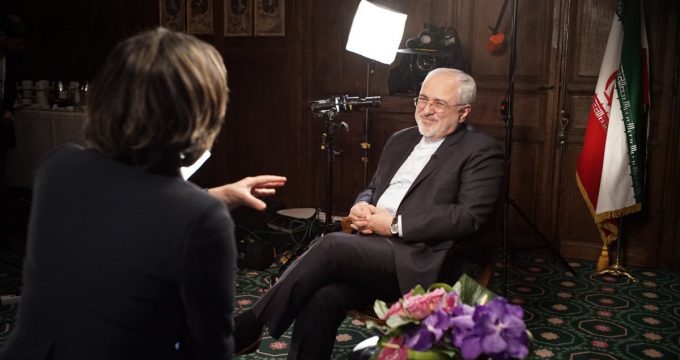 No to US troops in Syria, nuclear deal to stay, Iran’s foreign minister says

CNN– Sending US ground troops to Syria to fight ISIS will fan flames of extremism in the region that will impact the security of the whole world, Iranian Foreign Minister Mohammad Javad Zarif told CNN’s Christiane Amanpour Friday.

He also said that the agreement with Iran to limit its nuclear program — brokered in 2015 by the US, Iran and five other world powers — will stay in place, despite noises to the contrary from members of US President Donald Trump’s administration.
Speaking on the sidelines of the Munich Security Conference, Zarif said there was an international consensus not to let the agreement — which took two years to negotiate — unravel.
“I believe everybody, including experts in the United States, know this was the best deal possible for all concerned, not just Iran but the US too,” he said.
“It was a triumph of diplomacy over coercion, because coercion doesn’t work any more.”

No to US soldiers in Syria

Regarding Syria, where Iran is in alliance with Russia in supporting the government of President Bashar al-Assad, the 57-year-old Iranian diplomat said it was the US “occupation” of Iraq that had created ISIS.
Zarif claimed that a nationwide ceasefire in Syria — brokered by Russia and Turkey in December — was largely working, and said that sending US soldiers to fight ISIS would add fuel to the fire.
“We cannot commit to solutions that are part of the problem,” he said. “I believe that the presence of foreign troops in Arab territory is a recipe for those extremists to rally behind and gain new fighters from disenfranchised youth.”
Regarding the global effort to destroy ISIS, Zarif pointed out that Trump himself had accused then-President Barack Obama of creating ISIS, and repeated criticisms of the US policy to arm opposition groups in Syria.

Iran is playing with fire – they don’t appreciate how “kind” President Obama was to them. Not me!

Zarif said that sanctions won’t work with Iran.
“Everybody (in) the past who has tested Iran know we don’t respond well to threats. We respond well to mutual respect and mutual interests.”
Zarif said the Obama administration tried to use economic sanctions to curtail Iran’s nuclear program, but eventually failed, with Iran increasing their number of nuclear centrifuges tenfold in that period.
“The reason Obama came to the negotiating table was because sanctions did not work,” Zarif told CNN.

Travel ban an ‘affront’ to Iran

Zarif said Trump’s proposed, but currently stalled, travel ban on seven mainly Muslim countries including Iran “was an affront to the entire nation.”
“You cannot find any Iranian who has committed a single act of terror against Americans, in any of these atrocities that have taken place,” he said. “Iran has always condemned every single terrorist incident in the United States since 9/11.”
Zarif said the ban was a departure from previous US policy that took issue with the government but not the Iranian people, and added that Iranians were among the most successful immigrants to the US.
“They (the US) don’t understand in a globalized world you cannot contain threats to one locality. Syria is now a training ground for terrorists creating havoc everywhere,” Zarif said.

Amanpour asked the Iranian Foreign Minister why Tehran chose to intervene in Syria on behalf of President Assad. “There are 500,000 people dead, there are twelve million refugees, there is torture, there is mass hanging — it is not my impression, those are the facts,” she said.
“Mistakes were made in Syria, as in the past mistakes have been made,” he replied. “The same people who armed Daesh [ISIS], armed the terrorist groups, were the same people who armed Saddam Hussein, were the same people who created and armed al Qaeda.”
“We should not continue to repeat history and then blame people who were on the right side.”
Responding to a question about people fearing Iran — partly because of its support for Hezbollah — Zarif said the Lebanese Shia militia entered Syria on the request of Assad “to prevent these extremist forces (ISIS and other Sunni Islamist groups) from infiltrating into Lebanon, which would be a threat against all of us.”
#IranDeal, 53rd Munich Security Conference (MSC), ISIS, Mohammad Javad Zarif, Syria crisis, US troops in Syria February 18, 2017
Zarif, Mogherini meet in Munich
FM Zarif congratulates Iranian Free-style wrestlers’ victory