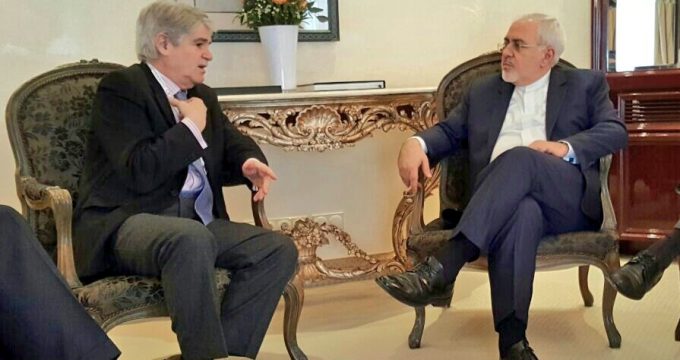 Referring to good relations between Tehran and Madrid, the two sides underlined that there exist grounds for expansion of bilateral ties.

The two sides also discussed issues like fight against terrorist groups and conflicts in Syria and Yemen.

Fight against Daesh and ways to destroy military abilities of the terrorist groups were discussed in the meeting and the two sides expressed their common point of view on returning peace and prosperity to Iraqi people.

Dastis underlined Madrid stance for settling tension in Syria through holding talks and dialogue upon the UN Security Council resolution 2254.

Foreign Ministry of Spain issued statement on this meeting and said that Dastis has expressed concern about growth of tensions in Yemen and disastrous human situation in the country.

After meeting with Zarif, Dastis wrote in his twitter that ‘ he had good meeting with his Iranian friend and that both sides will try to consolidate nuclear deal and cooperate for regional tensions.

The statement said that Zarif has invited his counterpart to pay visit to Iran.