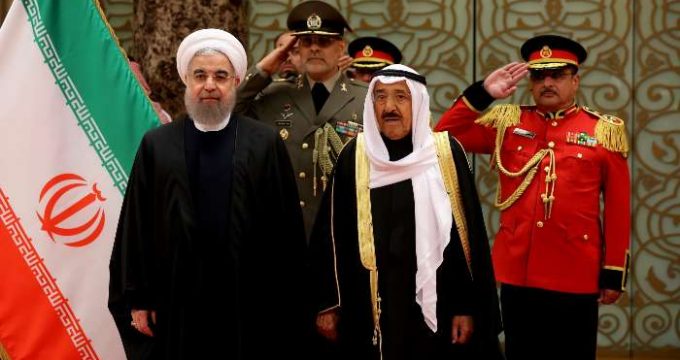 Experts: Kuwait could be Iran’s gateway to the Persian Gulf

Middle East Monitor– The Iranian president’s visit to Kuwait this week could kick-start dialogue between Tehran and the Persian Gulf States, say analysts.

Iranian President Hassan Rouhani visited Oman on Wednesday before moving on to Kuwait for his first visit to the oil-rich Gulf country since he was elected president in mid-2014.

“Oman is also close to Tehran and has played a role in bridging the US-Iranian gap,” he said.

At a December GCC summit held in Bahrain, the six-nation Persian Gulf bloc had tasked Kuwait with establishing contacts with Iran.

“The visit could lead to a breakthrough in Persian Gulf-Iranian relations and an easing of tension between the two sides,” Al-Mannaa said.

“Iran seeks to prevent the US from exploiting Iran-Persian Gulf tension to escalate the situation against Tehran,” he said.

“Iran therefore hopes to defuse [Persian Gulf-Iran] tension before it turns into a major crisis,” he added.

“Iran wants to show that it’s a major regional player and can’t be ignored,” he said.

Tension has mounted between the Persian Gulf and Iran since Riyadh cut diplomatic ties with Tehran early last year. The move came after two Saudi diplomatic missions in Iran were attacked by protesters following the execution of a prominent Shia cleric by the Saudi authorities.

Saudi Arabia and its Persian Gulf allies also accuse Tehran of supporting Yemen’s Shia Houthi group, which overran the Yemeni capital Sana’a and other parts of the country in 2014.

The ongoing conflict in Syria, which is about to enter its seventh year, has also contributed to the deterioration of Persian Gulf-Iran relations.