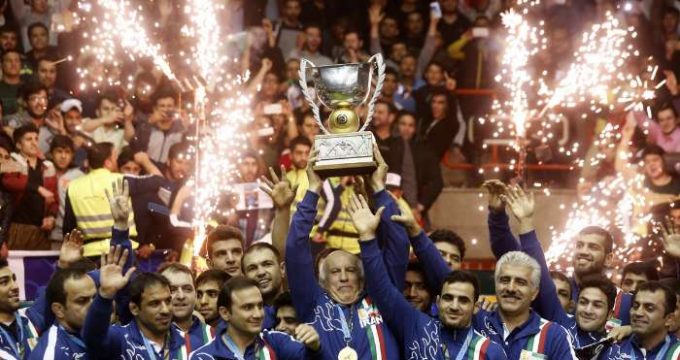 Iran defends title after beating US in 2017 Freestyle World Cup

Press TV- The Iranian men’s national freestyle wrestling team has claimed the top position at the end of the 2017 Freestyle World Cup in the western Iranian city of Kermanshah, after trouncing the American side in the title challenge.

On Friday evening, the Iranian sportsmen immersed spectators at Kermanshah’s Imam Khomeini Sport Venue and wrestling enthusiasts worldwide into tremendous admiration, as they outmuscled their American counterparts 5-3 in their final meetings.

Later, Hassan Yazdani Cherati of Iran lost to American wrestler David Taylor 8-4 by a technical fall in the 84-kilogram class.

Iran’s Amir Mohammadi was not successful in his Herculean task to overcome Kyle Frederick Snyder in the 97-kilogram, and fell to him 6-0.

The 2017 Freestyle World Cup kicked off in Kermanshah, western Iran, on February 16 and wrapped up the next day.

Azerbaijan finished in the third place after defeating Turkey in the bronze-medal playoff that ended 7-1.

Russia ended in the fifth place after downing Mongolia 7-1, and Georgia stood seventh after emerging victorious from its match with India 7-1.

The Iranian freestyle wrestling team took the World Cup title for the sixth year in a row on Friday, having recorded straight titles from 2012 and, thereby, cementing its claim as one of the most dominant forces in the history of the sport.

Iranian President Hassan Rouhani extended his felicitations to Iran men’s national freestyle wrestling team over its outstanding performance at the 2017 Freestyle World Cup and finishing first in the high-status event.

“This victory is another sign of the beloved Iranian athletes’ aptitude and competence to bring honor in all sports. I personally congratulate my dearly loved compatriots and participating sportsmen on this triumph, and extend my gratitude over the successful efforts of all coaches, organizers and the country’s sports officials, hospitable people of Kermanshah, and offer my prayers for the pride of our dear youths in all spheres of efforts and competition,” Rouhani wrote in his congratulatory message.