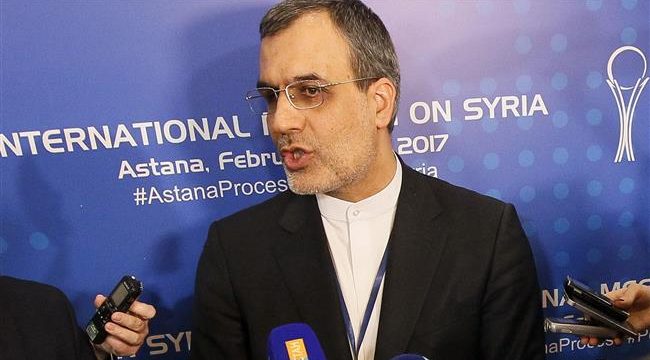 Press TV- The head of Iran’s delegation to the Syria talks in Astana has underlined the importance of the diplomatic process in Kazakhstan’s capital, saying the discussions are aimed at facilitating intra-Syrian dialogue.

Iran believes that “the most important task for the Astana talks is to facilitate Syrian-Syrian negotiations with the aim of restoring peace and security to Syria,” Iranian Deputy Foreign Minister for Arab and African Affairs Hossein Jaberi Ansari said in the Astana summit on Thursday.

The efforts made by Iran, Syria and Turkey to mediate the Astana talks was no replacement for the previous efforts by the international community to help end the Syria crisis, but rather serve as a supplementary initiative, he noted.

Jaberi Ansari further said the Astana event has “taken initial steps in the path of resolving the crisis,” urging redoubled efforts for the peace process to bear fruit.

“Major achievements have been made to contain the Syria crisis” during the two rounds of the Astana talks, the Iranian diplomat stressed.

He reiterated the Islamic Republic’s commitment to efforts aimed at ending the Syria conflict, adding that Tehran backs Syria’s territorial integrity and national sovereignty as well as the Arab nation’s right to determine its fate.

He also called on all Syria groups to join peaceful talks with the Damascus government.

The second round of the Astana talks began earlier on Thursday.

The first round of the discussions, which was similarly mediated by Tehran, Moscow and Ankara, took place in January and brought together representatives from the Damascus government and opposition groups for the first time during nearly six years of conflict.

Speaking at a press conference in Astana, Syria’s Permanent Representative to the United Nations Bashar al-Ja’afari said that the fresh round of Astana talks paved the way for the upcoming talks on the Syria crisis scheduled to be held under the United Nations auspices in the Swiss city of Geneva on February 23.

“We look forward to having Astana track continued and be successful to the effect of serving the hopes and aspirations of the Syrian people in having security and safety restored all over Syria,” Ja’afari said.

He also noted that the meetings held between the Syrian government delegation and the Russian and Iranian officials were “fruitful” and contributed a great deal to the convening of the Astana talks.

Syria remains committed to the terms of a nationwide ceasefire in the country, but it “maintains the right to respond to any breach of these arrangements by the armed terrorist groups,” the Syrian official pointed out.

He further stressed that Syria “will continue its efforts to liberate every inch of its territory from the control of the terrorist groups.”

Ja’afari lashed out at Turkey for its failure to commit to controlling its border with Syria and facilitating the entry of tens of thousands of terrorists from all corners of the world into Syria.

“Turkey can’t play both roles of causing a fire and fighting it at the same time,” he said.

Syrian army soldiers and allied fighters have been fighting against different foreign-backed militant groups wreaking havoc in the Arab country since 2011.