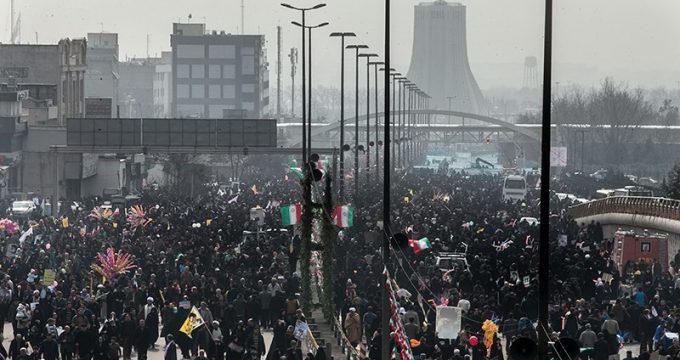 Iran begins the mass production of state-of-the-art defense equipment newly designed and manufactured by experts at home to enhance the country’s capabilities in ground and aerial warfare.

May refuses Netanyahu’s call to impose new sanctions on Iran

Theresa May has resisted pressure to re-examine the viability of the international nuclear deal with Iran from her Israeli counterpart, Benjamin Netanyahu, who urged her to follow Donald Trump’s example by imposing fresh sanctions.

Iran has received the final consignment of a 149-tonne shipment of uranium from Russia as part of its 2015 nuclear agreement with the P5+1 group of countries, the Atomic Energy Organization of Iran (AEOI) says.

Iran and Russia have underscored the importance of Tehran’s nuclear agreement in maintaining the regional and international security.

Foreign Minister Mohammad Javad Zarif said on Thursday that Tehran’s message is peaceful and friendly life with those ready for mutual respect.

President Hassan Rouhani has hailed Iranians for turning out in millions on Friday to celebrate the anniversary of the Islamic Revolution, saying the rallies are a response to recent threats by new US rulers against Iran.

The European Union’s foreign policy chief, Federica Mogherini, said on Friday she was reassured during meetings with President Donald Trump’s administration that the United States was committed to full implementation of the Iran nuclear deal.

The Non-Aligned Movement (NAM) has deplored the US government’s recent “unilateral and coercive” measures against Iran, expressing the body’s support for the Islamic Republic’s national sovereignty, territorial integrity and political independence.

Leader of the Islamic Revolution Ayatollah Seyyed Ali Khamenei has blamed the United States and many European countries for the bitter events in the Middle East.

Foreign Minister, Mohammad-Javad Zarif, said on Monday that with removal of sanctions, there will be no problem at work for development of Iran-Belarus economic and banking cooperation.

Iran sees no barriers to oil talks with Riyadh

Iranian Oil Minister Zanganeh, while emphasizing that Iran assumed no barrier to talks with Saudi Arabia on oil market issues, said bilateral talks will continue within framework of national and mutual interests.

Turkish discount retailer BIM says it is exploring opportunities in Iran for possible opening of stores in a country which has largely remained closed off for years under sanctions.

Documents of sanctions losses to be submited to ECJ soon

A senior official at the Bank Tejarat of Iran said on Thursday that a lawsuit filed in the European Court of Justice (ECJ) for losses Iran sustained during nuclear sanctions, was registered by the ECJ and that necessary documents will soon be handed over to the lawyers of the case.

Senior Advisor to the Iranian Parliament Speaker Hossein Amir Abdollahian said Riyadh has been in secret collusion with Tel Aviv to kill the civilians in Yemen.

Syrian President Bashar al-Assad says the tide of events in the Arab country is changing in favor of Damascus and Moscow, which are both engaged in a battle against foreign-backed terrorists.

The next round of Astana talks on Syria settlement will take place on February 15-16, Russian Foreign Ministry’s spokeswoman Maria Zakharova said on Thursday.

Secretary of Supreme National Security Council has not ruled out possibility that Russian fighter jets could use Iranian airspace to hit targets in Syrian territories against extremists.

Several rockets have been fired at Baghdad’s Green Zone following violent clashes between police and supporters of cleric Muqtada al-Sadr which claimed the lives of at least seven people.

The director of film musical ‘La La Land’, who won the top prize at the Directors Guild of America Awards ahead of the Oscars later this month, backs Iranian director Asghar Farhadi who decided not to attend the Oscar ceremony because of Trump’s travel ban.

An Iranian infant in need of life-saving heart surgery arrived Tuesday at a Portland hospital with her family after being temporarily banned from coming to the U.S. by President Donald Trump’s immigration orders.

Iran has held the country’s first women’s motocross championship in the capital city of Tehran.

A team of Russian geologists from Ural Federal University recently returned from an expedition in the Lut desert in the east of Iran. The team found 13 kilograms of meteorite-like material. Sputnik Persian spoke with Viktor Grokhovsky a member of the Committee on Meteorites at the Academy of Sciences.