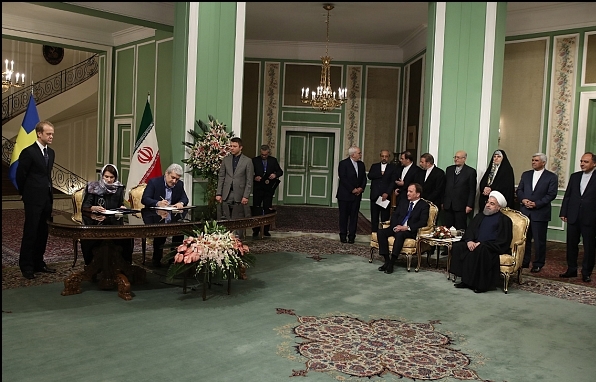 MNA – Iran and Sweden on Sat. signed five memoranda of understanding in the fields of technology, research, roads, IT and women and family affairs.Swedish Prime Minister Stefan Löfven arrived in Tehran Friday night and was officially received by President Hassan Rouhani at Sa’dabad Palace on Saturday morning.

Following the meeting between the two senior officials, an MoU in the field of innovation and technology was signed by Iran’s Vice-President for Science and Technology Sorena Sattari and Sweden’s Minister of EU Affairs and Trade Ann Linde.

Another cooperation document was signed on higher education and research by Iran’s Minister of Science and Research Mohamamd Farhadi and Sweden’s Ann Linde.

Iran’s Minister of Roads and Urban Development Abbas Akhoundi and Iran’s ICT Minister Mahmoud Vaezi each signed an MoU on roads development and communications and information technology with Minister Linde.

The fifth MoU was signed on women and family affairs by Iran’s Vice-President Shahindokht Molaverdi and Minister Linde.