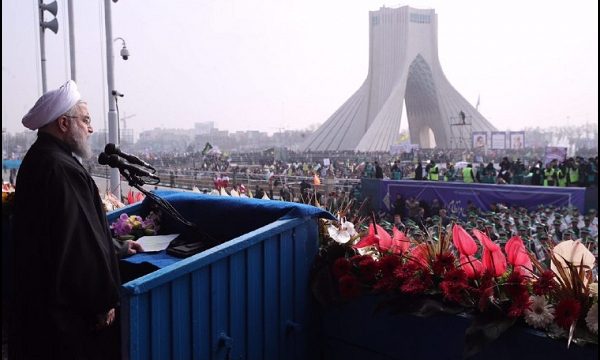 Press TV- Iran’s President Hassan Rouhani says his administration has been able to reduce the country’s reliance on oil revenues over the past three years.

Rouhani made the announcement in a speech at a rally in Tehran to mark the anniversary of the 1979 Islamic Revolution.

“Over the past three years, Iran’s reliance on oil in the national budget has decreased,” he told thousands who had gathered in Tehran’s Azadi Square.

“This is the same thing that the Leader of the Islamic Revolution [Ayatollah Seyyed Ali Khamenei] had been insisting for year.”

Rouhani further emphasized that his administration had been able for the first time to take the country’s trade balance into the positive territory.

“After 37 years [from the Islamic Revolution], we were for the first time able to achieve a positive trade balance,” he said, adding that this was a significant achievement given that the country’s trade balance during a certain period in early 2000 was in the negative territory by at least $20 billion.

Rouhani also said that the exports of non-oil products will take over oil exports by the end of the current Iranian calendar year (21 March 2017).

The Iranian president said the country’s production of natural gas from the huge South Pars gas field – which Iran shares with Qatar – would exceed Qatar’s by the end of summer.

“This is while Qatar’s production from the field was higher than Iran’s in the past by 2.5 times.”