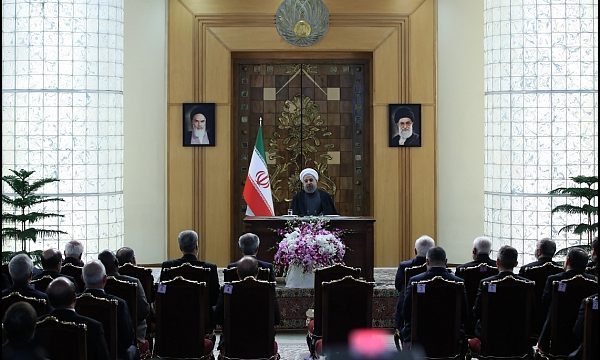 Press TV- Iranian President Hassan Rouhani has stressed that Iran’s military might is merely meant for self-defense as the country has never interfered in the domestic affairs of other states and has no plans to do so in the future.

“Iran’s military power is solely meant for defending the country,” Rouhani said in a meeting with ambassadors and foreign envoys in Tehran on Thursday during a ceremony held on the eve of the 38th anniversary of the victory of Iran’s 1979 Islamic Revolution.

“The Islamic Republic has never invaded any country and has no such intention. Our weapons are meant to defend the country and [we] should not allow certain parties to spread illusions in order to create unhealthy conditions in the region and the world,” added the president.

Some 38 years ago, the greatest revolution in the region and the world became victorious in Iran through mere reliance on the people and despite the support offered to the past dictatorial regime of Iran by many countries, the Iranian chief executive added.

On Friday, millions of Iranians will pour onto the streets across the country to mark the victory of the 1979 Islamic Revolution, which put an end to the monarchical rule of the US-backed Pahlavi regime.

The rallies come at a time of increased belligerence against Iran by the new US administration under President Donald Trump.

The US officials have recently ratcheted up their hostile remarks toward the Islamic Republic using Iran’s recent missile tests as excuse.

Iran argues that its missile program is an inalienable right of the Iranian nation under the international law and the United Nations Charter. The Islamic Republic has always stressed that its military might poses no threat to other countries and is in line with the country’s plan to boost its deterrence power.