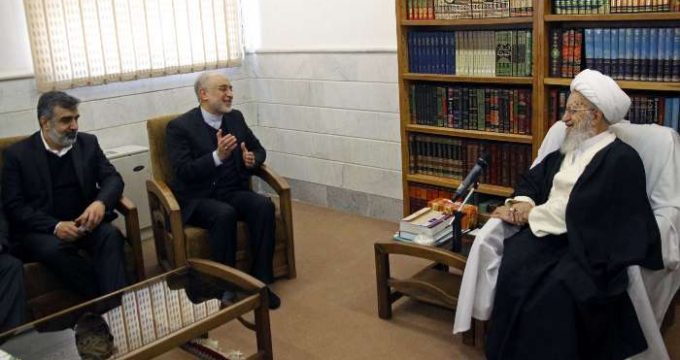 World should know about US disloyalty to JCPOA: Senior cleric

IRNA – Grand Ayatollah Nasser Makarem Shirazi said that the world should know about the US lack of commitment to the Joint Comprehensive Plan of Action (JCPOA) and learn that it is not trustworthy.

The senior cleric made the remarks in a meeting with the Head of the Atomic Energy Organization of Iran (AEOI) Ali Akbar Salehi on Monday.

Salehi travelled to Qom in order to visit senior clerics of the holy city which is Iran’s religious capital to brief them on latest achievements of the AEOI and JCPOA developments.

Atatollah Makarem Shirazi noted that the world should know that if the US administration concludes a deal with a country today, it can be breached tomorrow by another person.

The grand ayatollah made the remarks while referring to the anti-JCPOA comments made by the US new President Donald Trump who had claimed during his presidential campaign that he would “dismantle” the landmark nuclear deal once he arrived in the White House. He has later rephrased his remarks by saying that the deal should be “reviewed.”

It is known by the world scholars that when a president signs a deal, the next president cannot reject it, said the senior cleric.

He further appreciated nuclear achievements made by the government of President Hassan Rouhani.

The landmark nuclear deal was signed in July 2015 by Iran’s negotiating team headed by Mohammad Javad Jarif and his counterparts from world six major countries (the US, Britain, Russia, France and China plus Germany) as well as the representative of the European Union.

Ayatollah Makarem Shirazi also said that achievements of the nuclear deal should be explained logically to the Iranian nation.