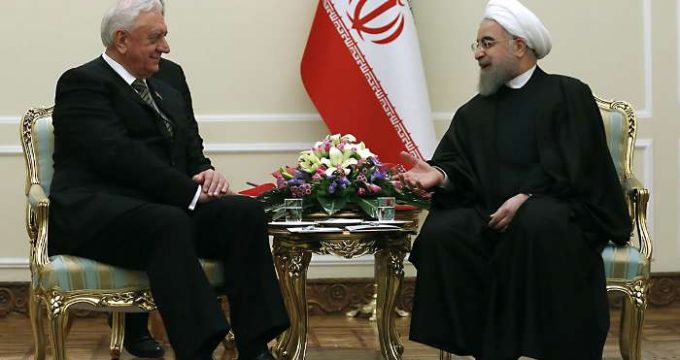 Press TV- Iranian President Hassan Rouhani says the Islamic Republic and Belarus have always stood by each other with their close political stance and cooperation on the international scene, stressing the importance of further improving ties.

“Tehran welcomes the expansion of cooperation in economy, investment, science and technology with Minsk and also [other] countries in the Eurasia region,” Rouhani said in a meeting with Belarusian Council of the Republic Speaker Mikhail Myasnikovich in Tehran on Monday.

“Developing and deepening mutual relations will serve the interests of the two governments and people,” he added.

He pointed to Iran’s plan to develop the North-South Transit Corridor, saying Tehran and Minsk can help link a stretch of the Persian Gulf and the European Union. The multimodal route will connect India, Russia, Iran, Europe and Central Asia.

The top Belarusian parliamentarian, for his part, stressed the importance of improving politico-economic cooperation between the two countries.

He said the time is ripe for strengthening economic cooperation between the two countries with the removal of sanctions against Iran.

All nuclear-related sanctions on Iran were terminated after Iran and the five permanent members of the UN Security Council – the United States, France, Britain, China and Russia – plus Germany started implementing the landmark nuclear agreement, known as the Joint Comprehensive Plan of Action (JCPOA), on January 16, 2016.

Iran and the P5+1 group of countries signed the nuclear deal in July 2015.

No obstacle to improving ties with Belarus: Iran FM

Iranian Foreign Minister Mohammad Javad Zarif also said on Monday nothing can hinder the improvement of economic and banking cooperation between Tehran and Belarus after the removal of sanctions.

“The two sides are capable of increasing their economic relations based on common interests,” Zarif said in a meeting with the top Belarusian parliamentarian.

He commended the “good level of parliamentary relations” between Tehran and Minsk and called on the two sides to make efforts to enhance their cooperation in other areas as well.

For his part, the Belarusian Council of the Republic speaker said his country attaches special importance to boosting ties with Iran in different fields.