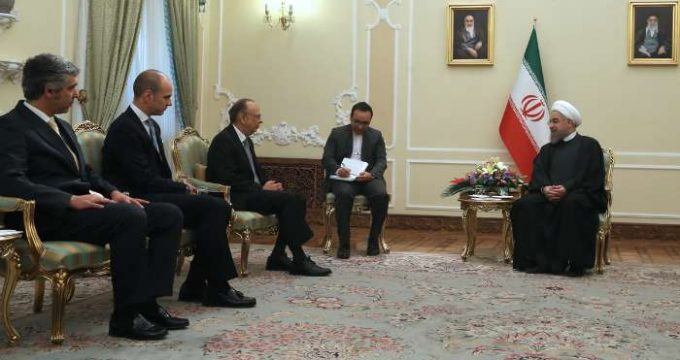 Mr. Rouhani said that Iran provided all countries including Portugal economic opportunities otherwise inaccessible when sanctions were biting the economy and kept at a distance foreign investments, thus leaving largely untapped Iran’s large consumer market; “now however, there would be no barrier for trade with Portugal thanks to conditions crated by JCPOA which opened Iran to foreign investors and businessmen,” he told the meeting. “We believe Iran and Portugal have ample opportunities for trade and advancing bilateral ties to new levels.”

Rouhani’s welcome to Portuguese industries highlights the honor and glory his administration feels after the JCPOA which brought to Iran modest economic openings and restored Iran’s image to normalcy; President Rouhani believed Iran’s energy (oil and gas) and industry sectors should work with Portuguese economic sectors to boost bilateral ties ; “there has been a nascent movement forward in bilateral ties, but we have a long way to go before reaching an optimum level both countries should achieve,” he told Portuguese new ambassador.

He called Portuguese investors and economic sectors to embrace the opportunities created by the JCPOA; “Portuguese banking and insurance sectors would come to Iran and contribute to country’s economy and in turn reap the advantages of working with Iran,” he suggested.

No less important in Rouhani’s remarks was the issue of terrorism which he had been touching regularly as Iran’s commitment to fight with extremism his own initiative (WAVE) brought to the UN General Assembly and succeeded in the Organization’s approval.

Mr. Corte Real for his part voiced his country’s strong resolve to advance matters of bilateral interest with Iran, especially after the historic deal JCPOA had changed the situation for Iran and the world as well; “we appreciate Iran’s ample capacities and resources to receive Portuguese contribution and thus will work with Iran in all fields including technology and university exchange programs,” he concluded.