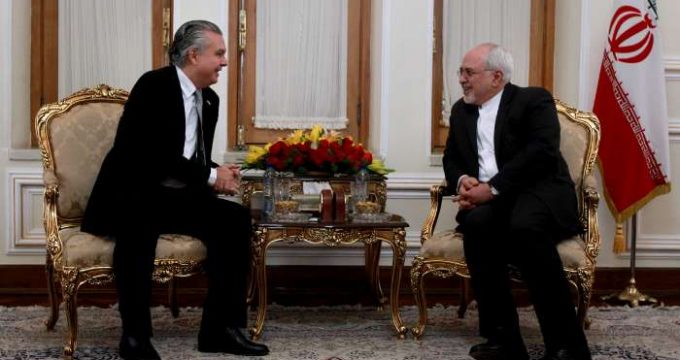 In a meeting with Iranian Foreign Minister Mohammad Javad Zarif on Sunday, Brazilian newly-appointed Ambassador to Tehran Rodrigo de Azeredo Santos presented his copy of credentials, and called for closer cooperation with Iran in various bilateral fields, especially in energy, oil, gas, and petrochemicals, while stressing the positive and constructive role of Iran in establishing peace and stability across the region.

He maintained that Brazil is not merely seeking exports to Iran, but rather it is interested in importing oil and energy conduits from the Islamic Republic.

De Azeredo noted the successful outcome of the 4th Iran-Brazil joint economic commission’s meeting back in November, saying the two countries enjoy ample capacities and opportunities for expansion of ties.

Foreign Minister Zarif, for his part, noted the skilled human recourses, energy and reasonable prices as benefits of working with Iran, saying the Islamic Republic is a good partner for economic, trade, investment and banking cooperation with Brazil.

At the end of the meeting, the Brazilian ambassador once again extended the invitation of Foreign Minister José Serra to Zarif for an official visit to Brazil.