A Look at Iranian Newspaper Front Pages on February 4

Iran Front Page- The ongoing war of words between Iran and the US was the top story today. US President Donald Trump’s anti-Iran tweets and the Iranian Foreign Minister’s response received great coverage.

The ban on Iranian citizens introduced by Trump and Iran’s reciprocal response also remained a top story as Iran’s Foreign Ministry barred US wrestlers from attending Iran Wrestling World Cup in reaction to the unfair ban on Iranian nationals.

The extreme cold and deadly avalanche in Iran were also widely covered. Many people have been entrapped under the snow, and three have lost their lives in an avalanche in northern Iran.

2- White House: Those Who Have Green Card Not Affected by Trump’s Order

3- London: May Supports Nuclear Deal in Meeting with Netanyahu 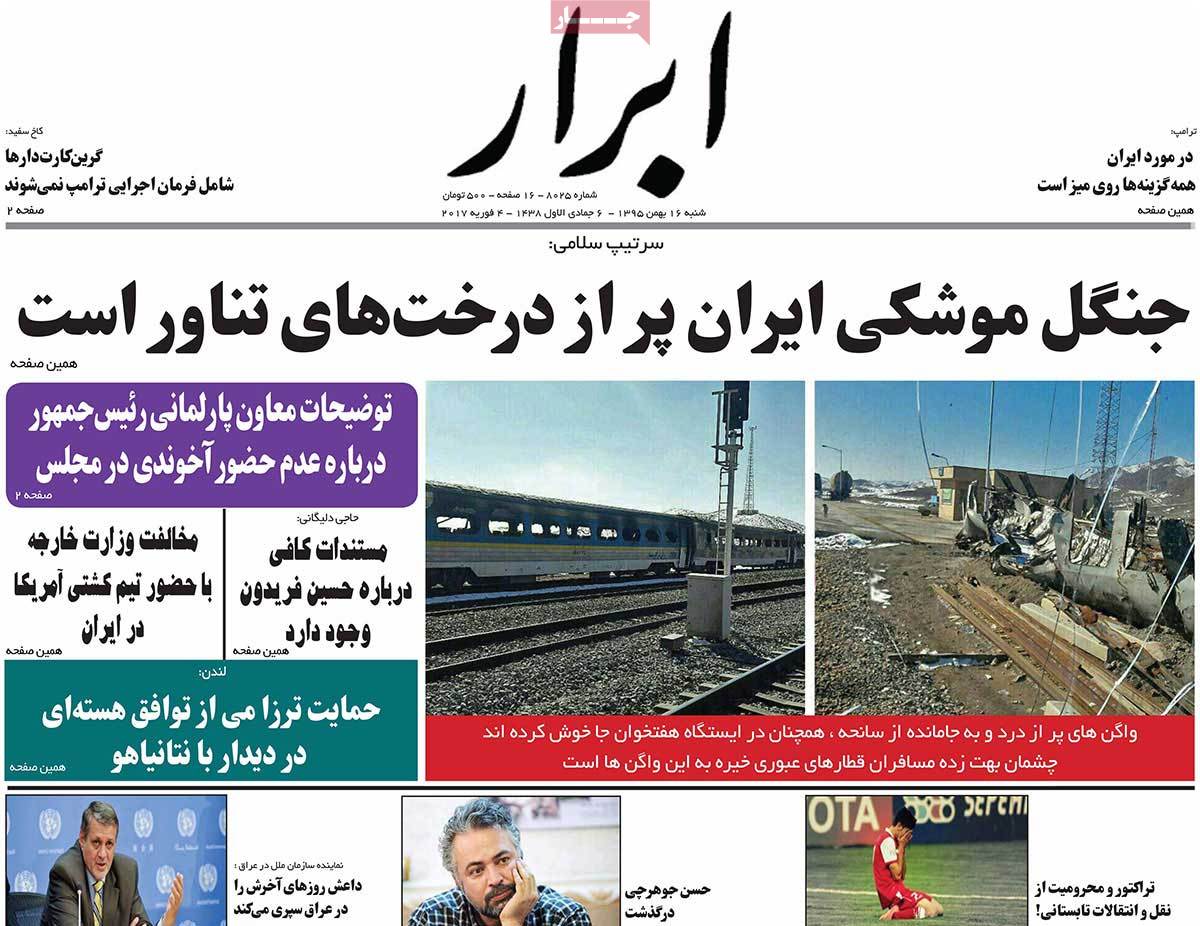 1- Trump after Fresh Anti-Iran Sanctions: I’m Not as Kind as Obama! 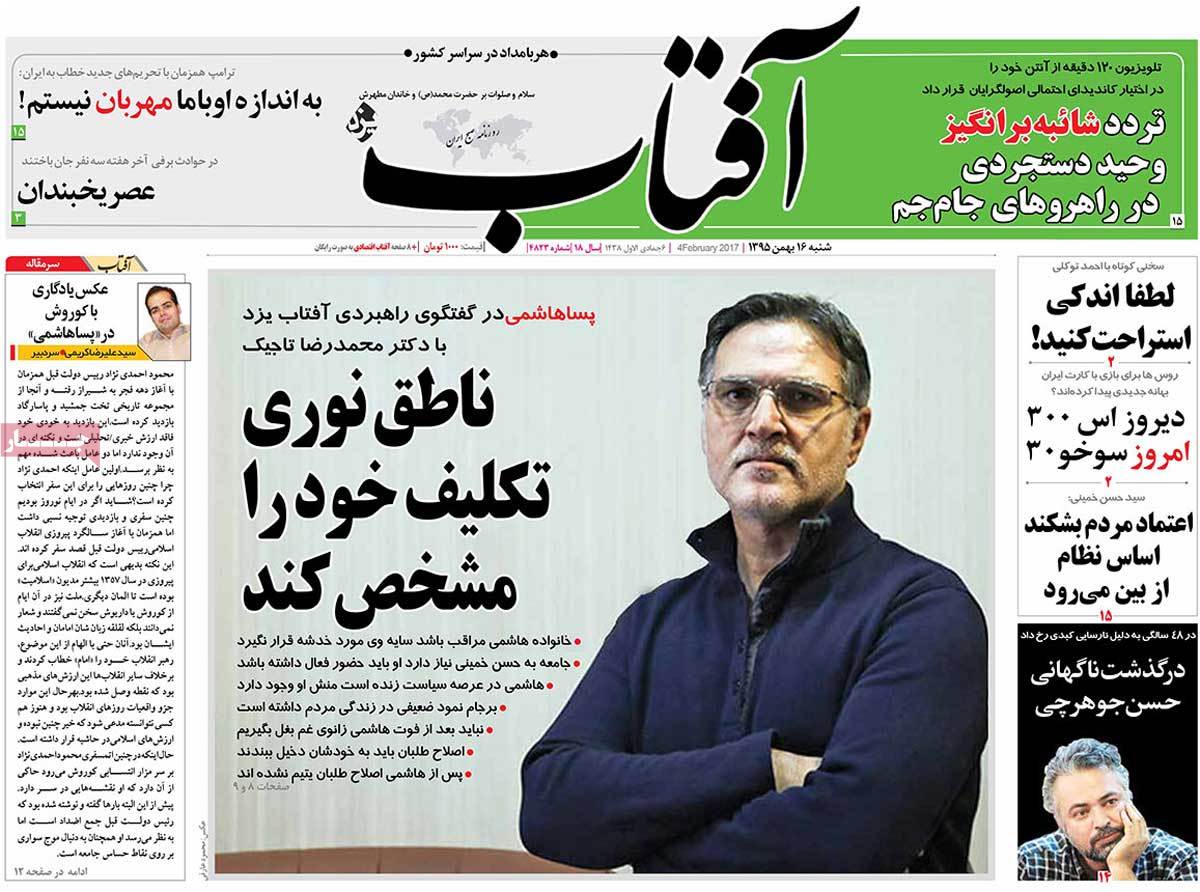 2- Snow Kills People: At Least 3 Lose Their Lives in Avalanche 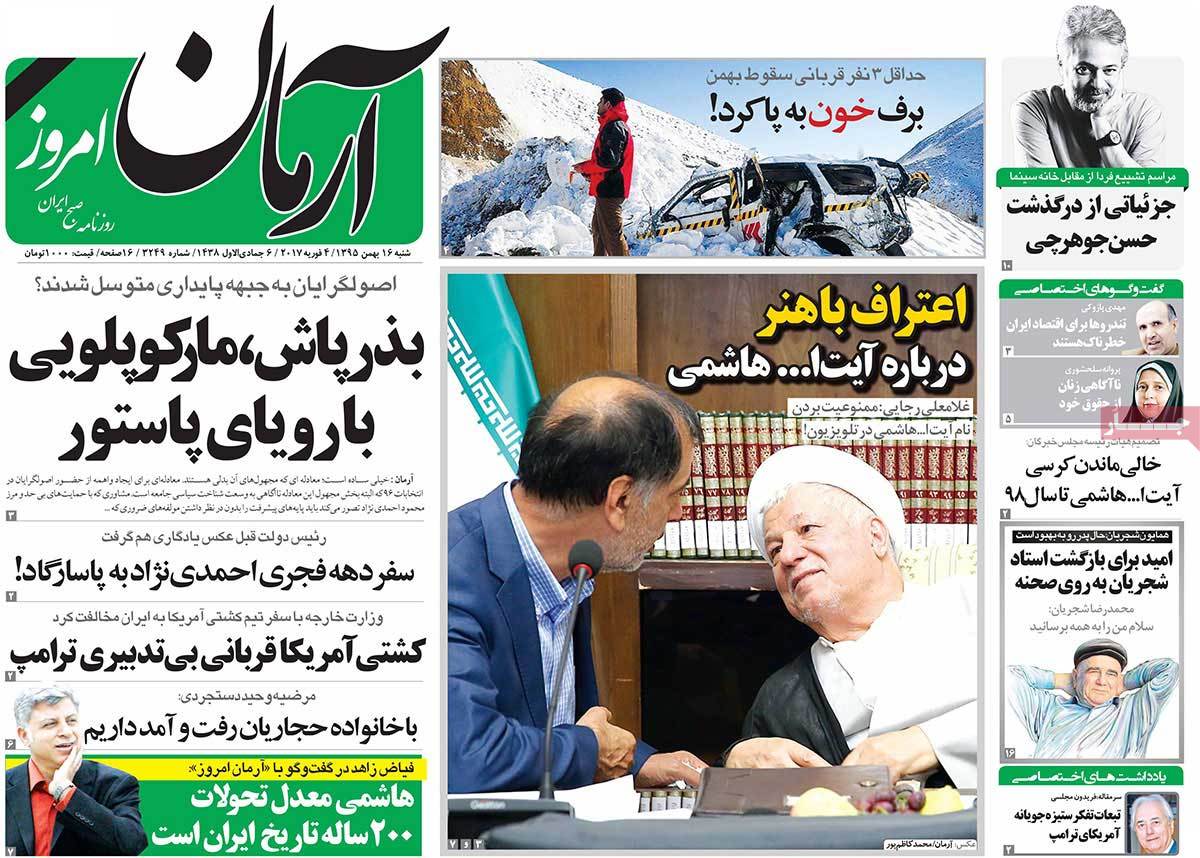 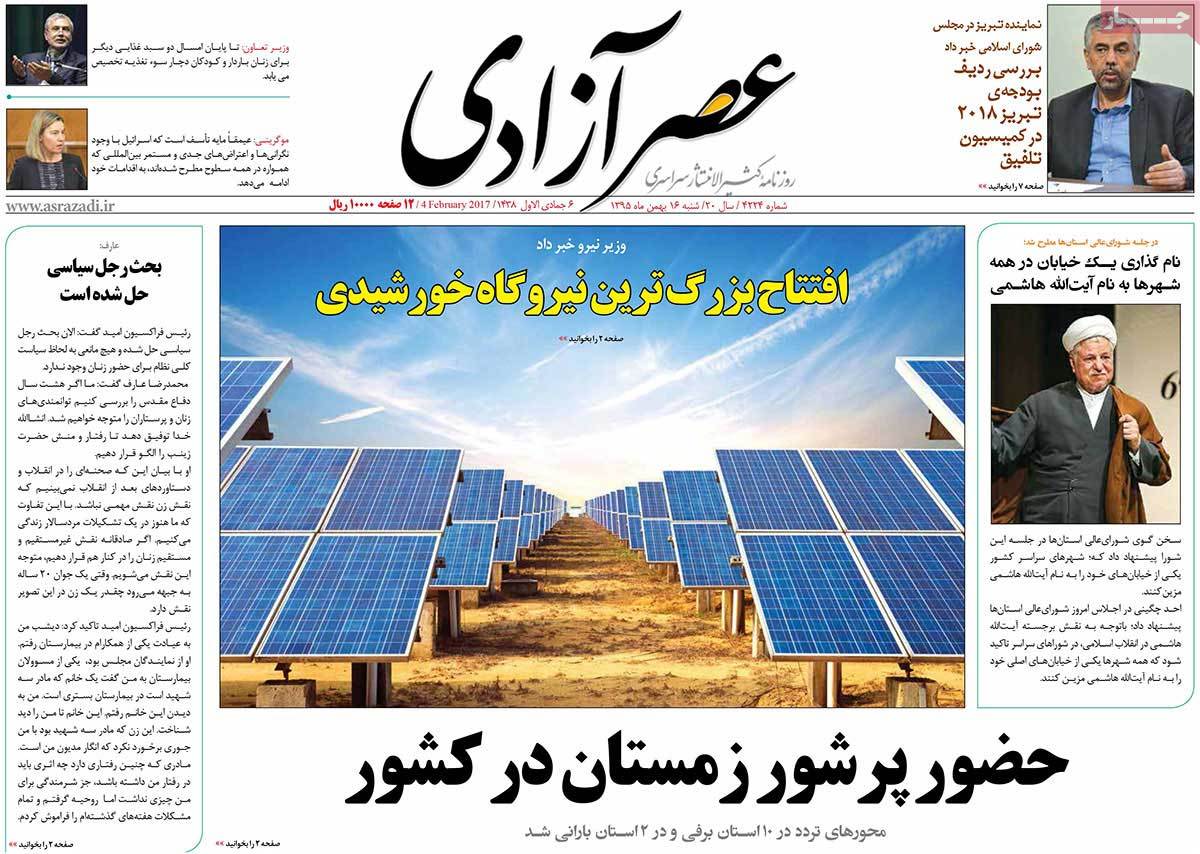 2- Transport Minister: Boeing Deal Not to Be Cancelled with Trump’s Order 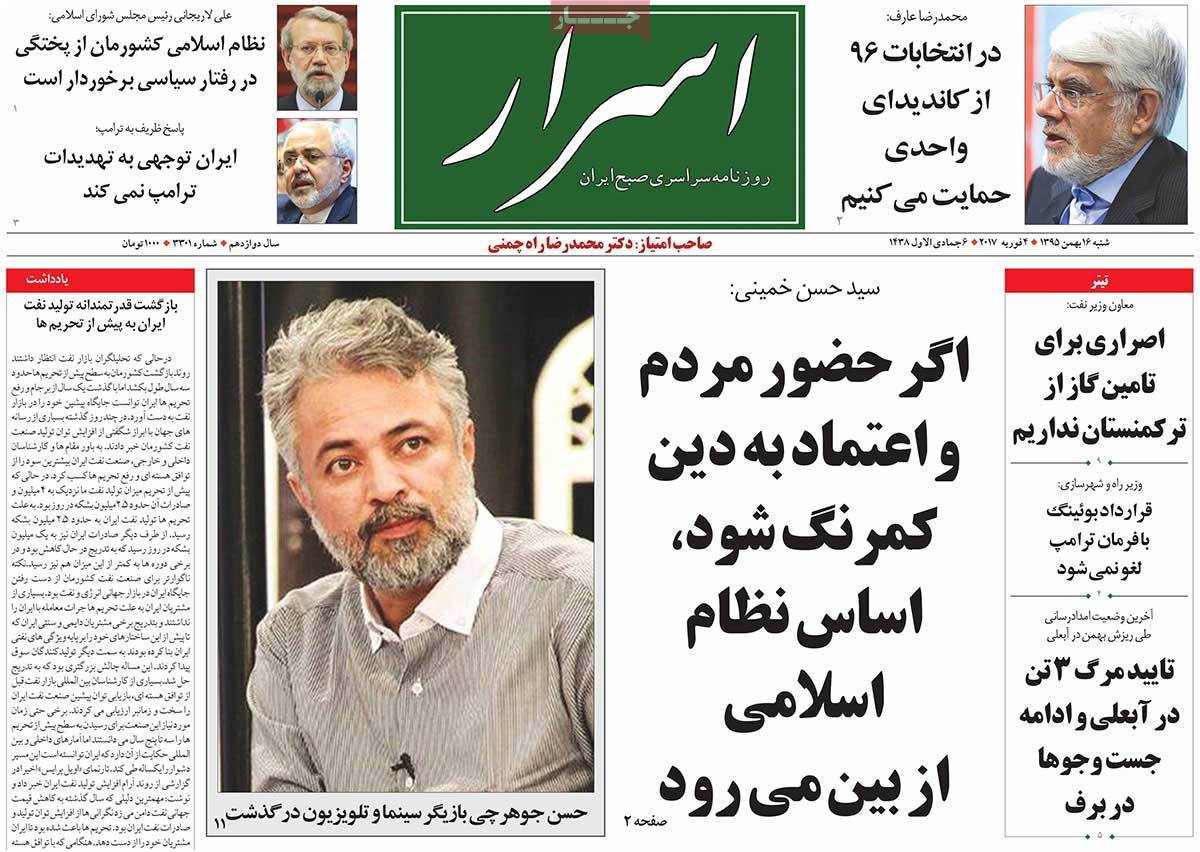 1- Fresh US Sanctions against 13 Iranian Individuals and 12 Bodies

1- Return to Era of War of Words: Trump Talks about Options Available

1- Trump Playing with Fire: US President’s Controversial Remarks Don’t Have an End; from New Sanctions to Series of Messages 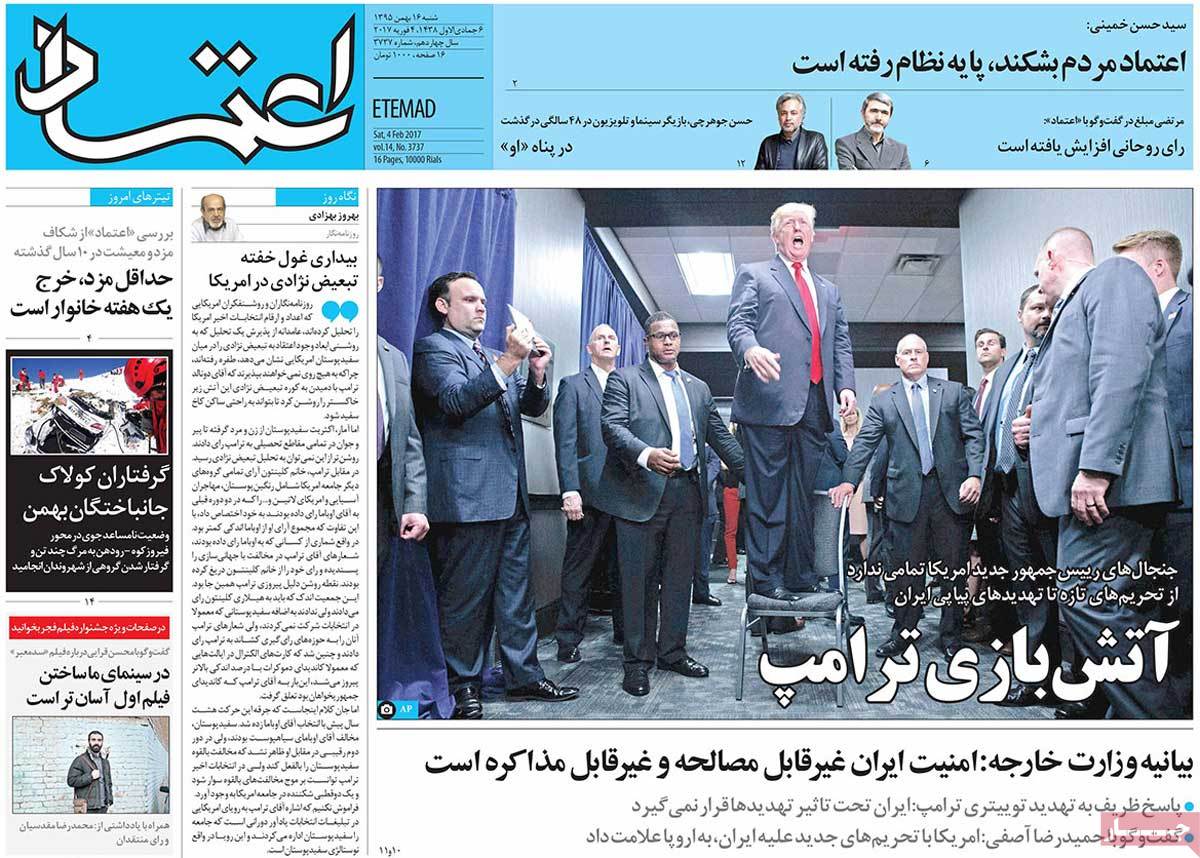 1- Iran’s FM: We Never Start a War [in reaction to Trump’s threats] 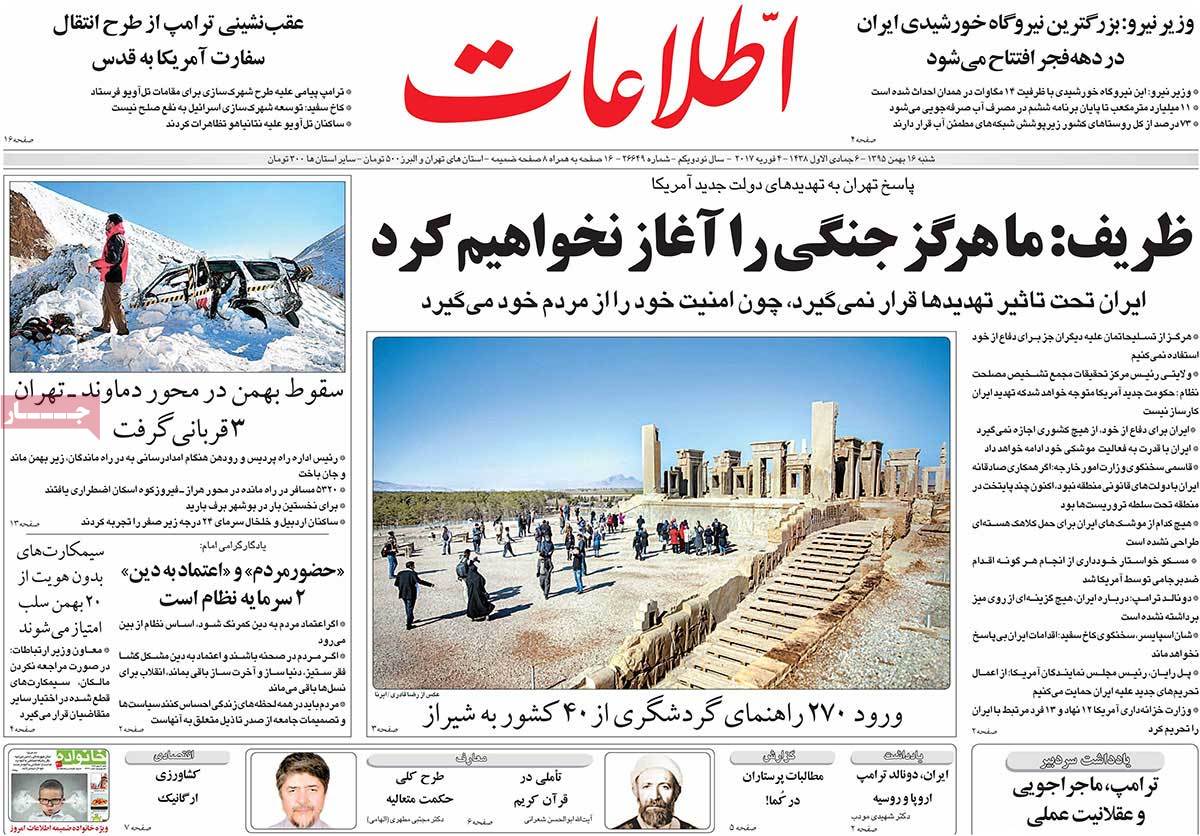 1- Analyst: Reformists’ Approach in Foreign Policy Is Closer to Leader’s 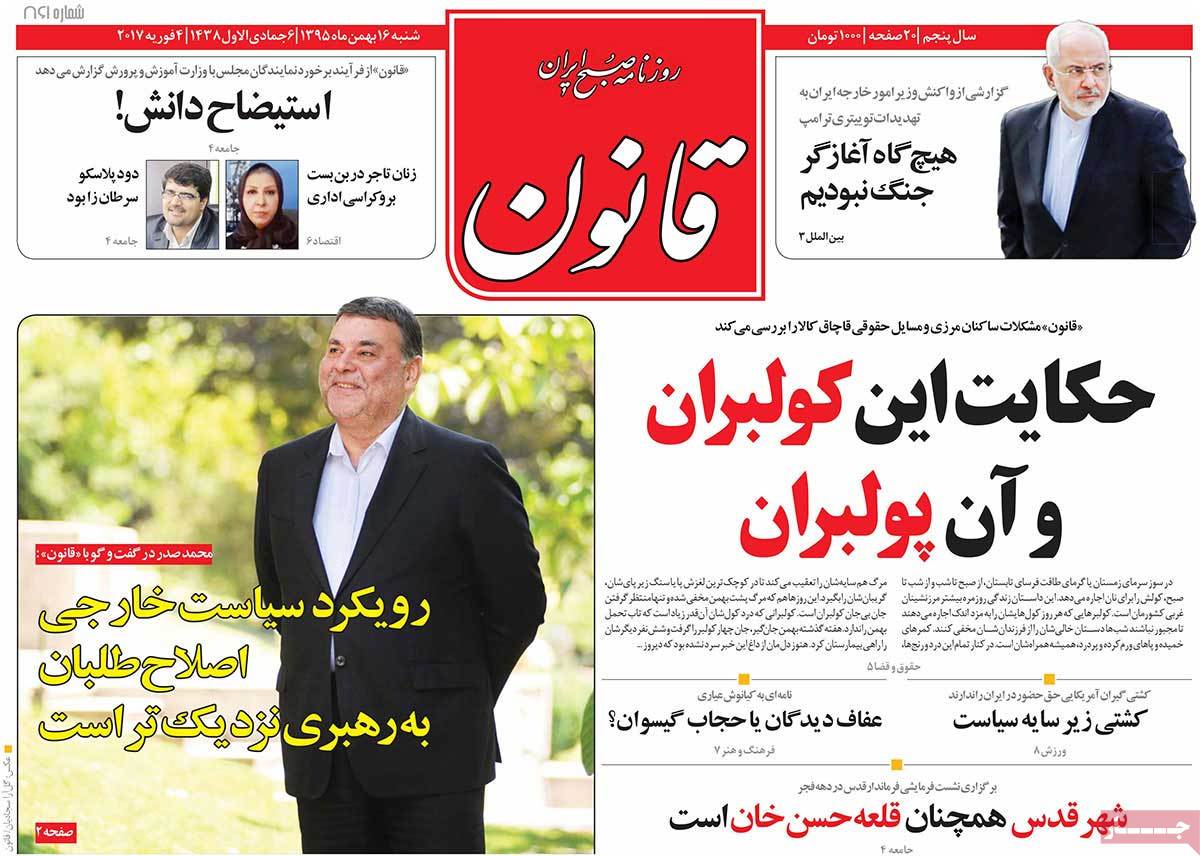 1- 12 Hours in Frozen Hell: Hundreds of Passengers Spent Horrific Night under Avalanche and Snowstorm in -15°C Temperature in Haraz and Firouzkooh Roads

2- What Does Trump Want from Us? US President’s Fourth Consecutive Tweet against Iran 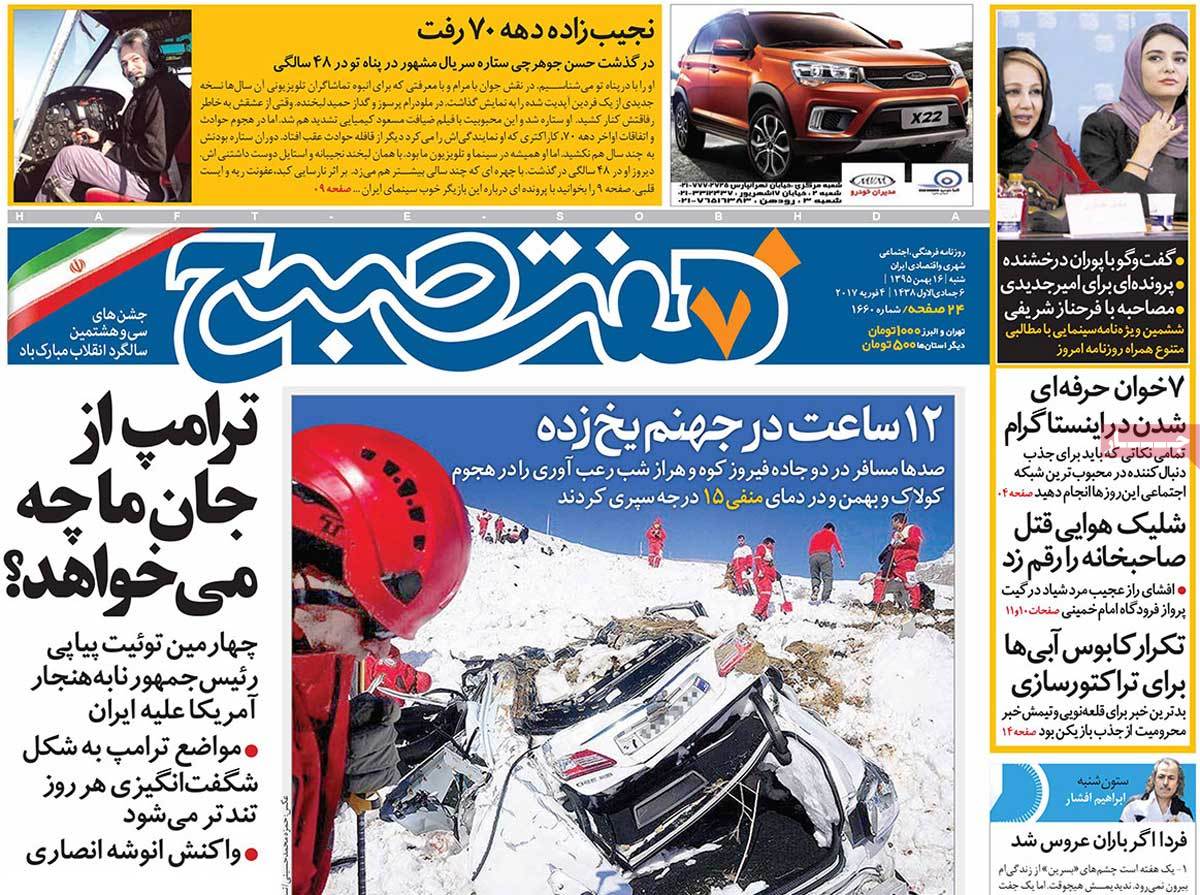 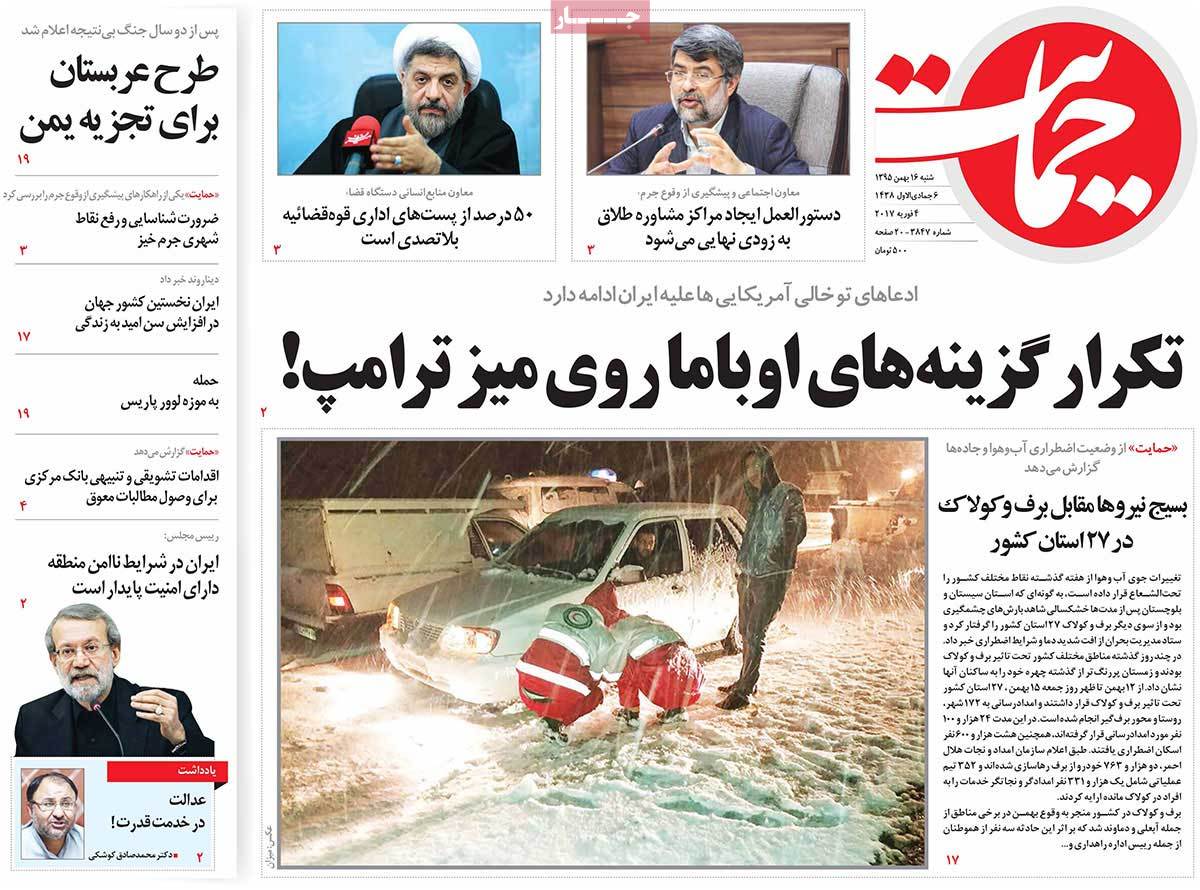 2- Zarif’s Response to Trump’s Anti-Iran Tweets: Iran Unmoved by Threats as It Derives Its Security from People

1- Trump, the US without Any Makeup: US President’s Words Reveal Washington’s True Face More than Ever 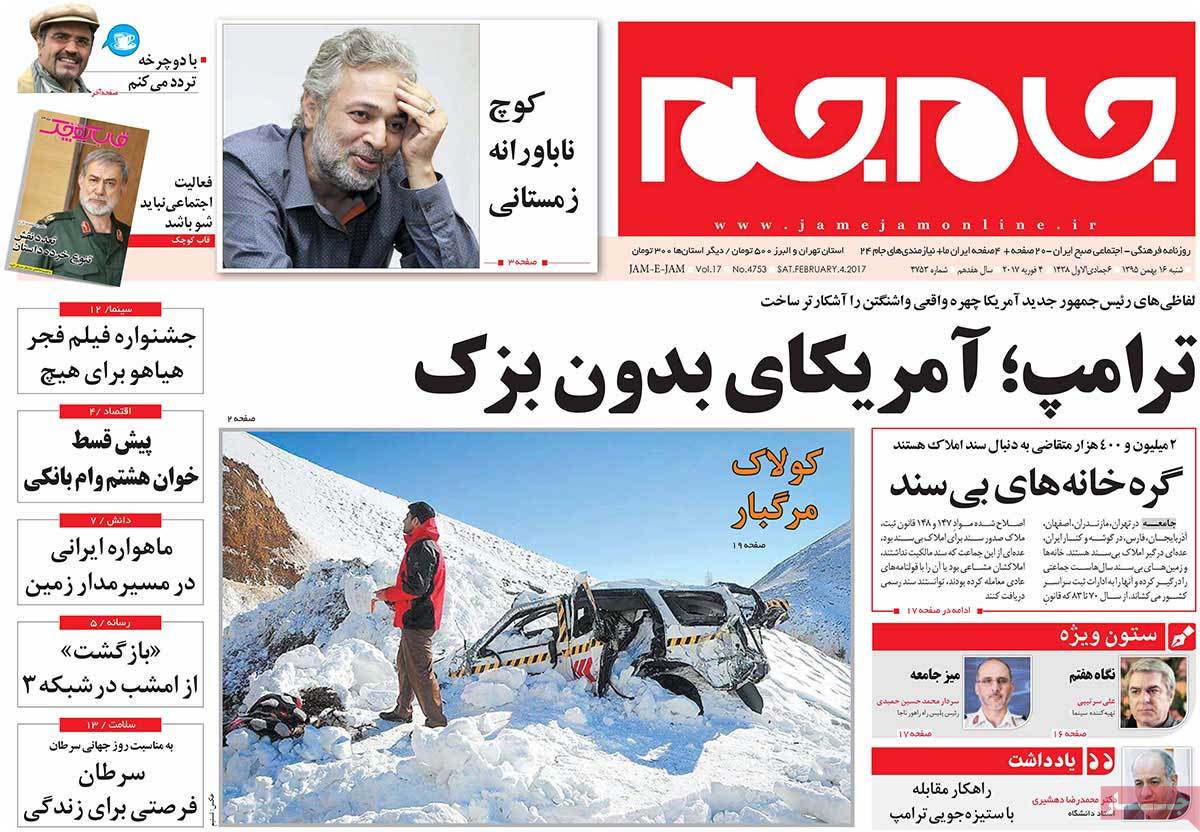 1- Pumping Out US Crisis: Trump Was Elected with “America First” Campaign Promise, but Now He’s Resorting to 40-Year-Old Anti-Iran Remarks after Unprecedented Domestic Opposition; He Has Nothing to Say More than Obama’s Repetitive Remarks: That All Options Are on the Table

2- Advisor to Iran’s Leader: Trump Should Ask about Iran from Previous US Administrations 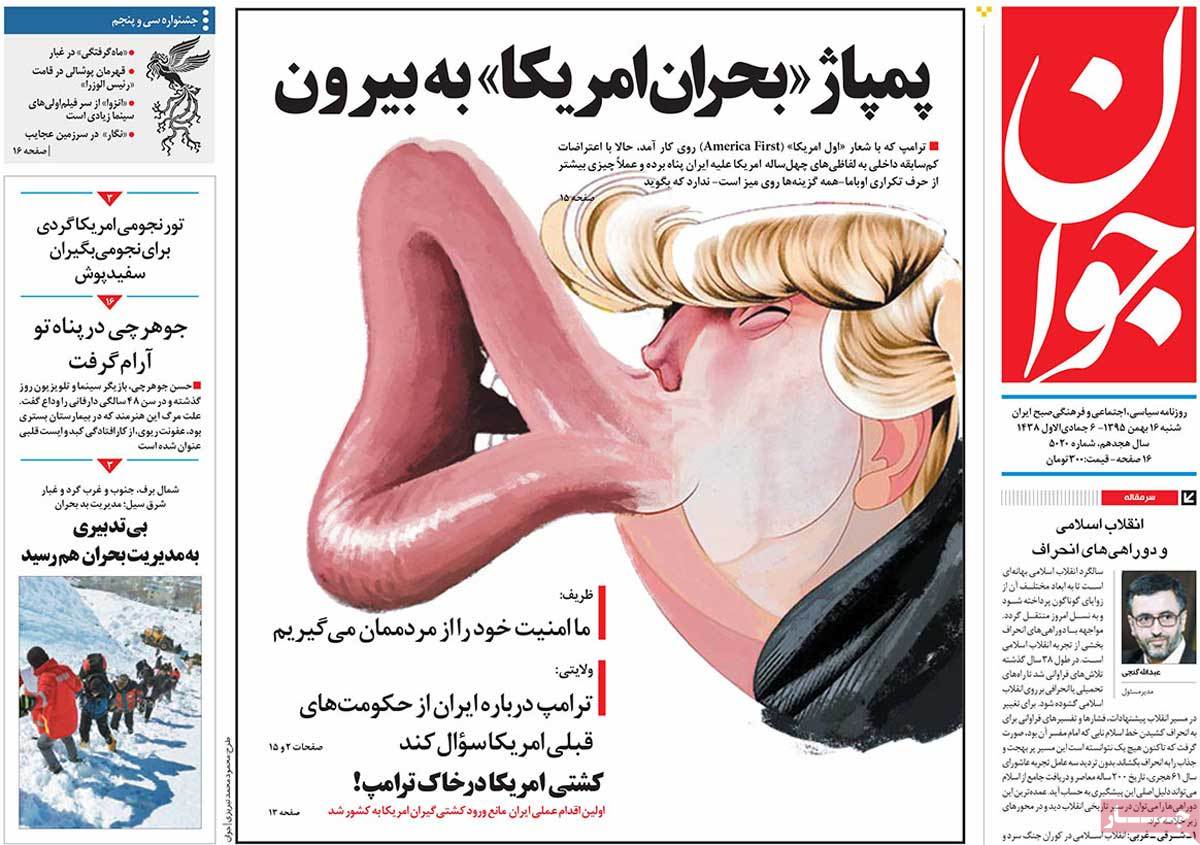 1- Iran’s Firm Reaction to US President’s Hostile Positions; FM: We Never Start a War, but We Can Rely on Our Defensive Positions

2- Parliament Speaker: Immaturity of Certain Country Leaders Creates Problems for Them and Others 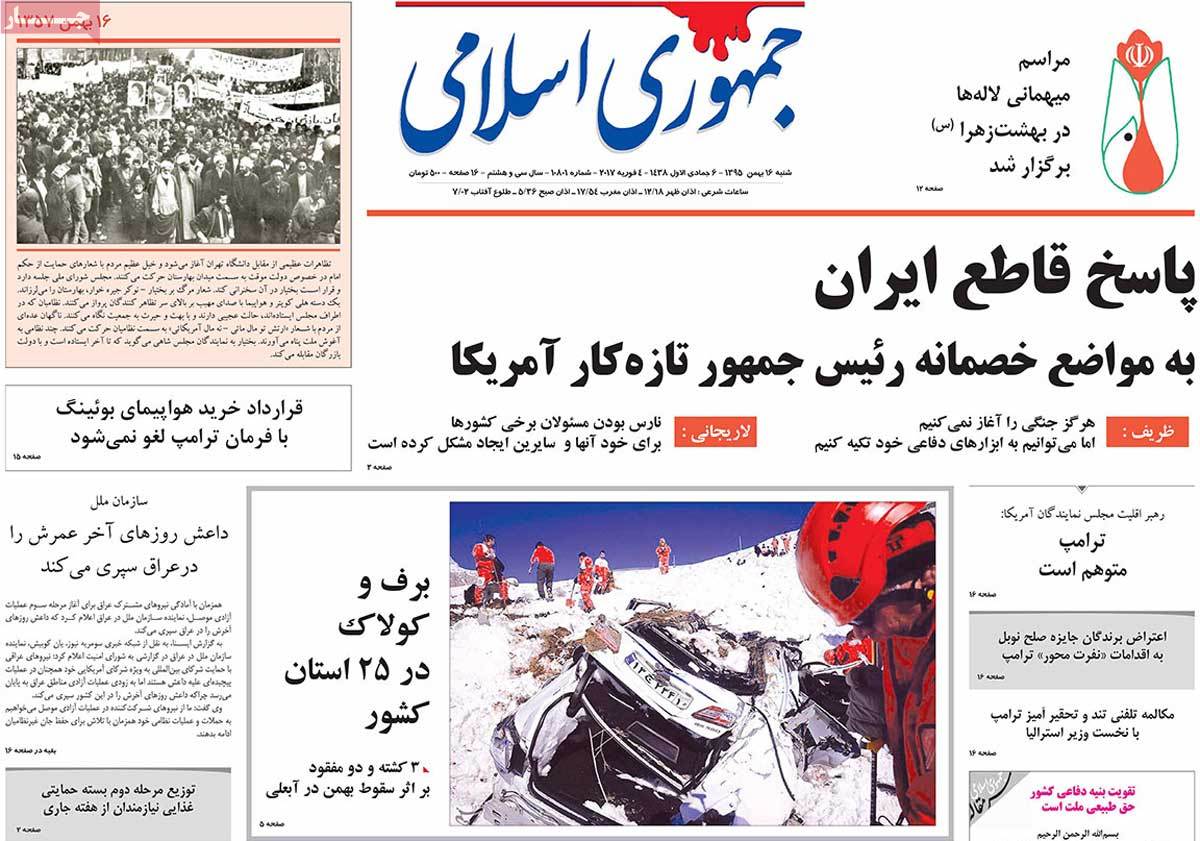 4- We Derive Our Security from Our People 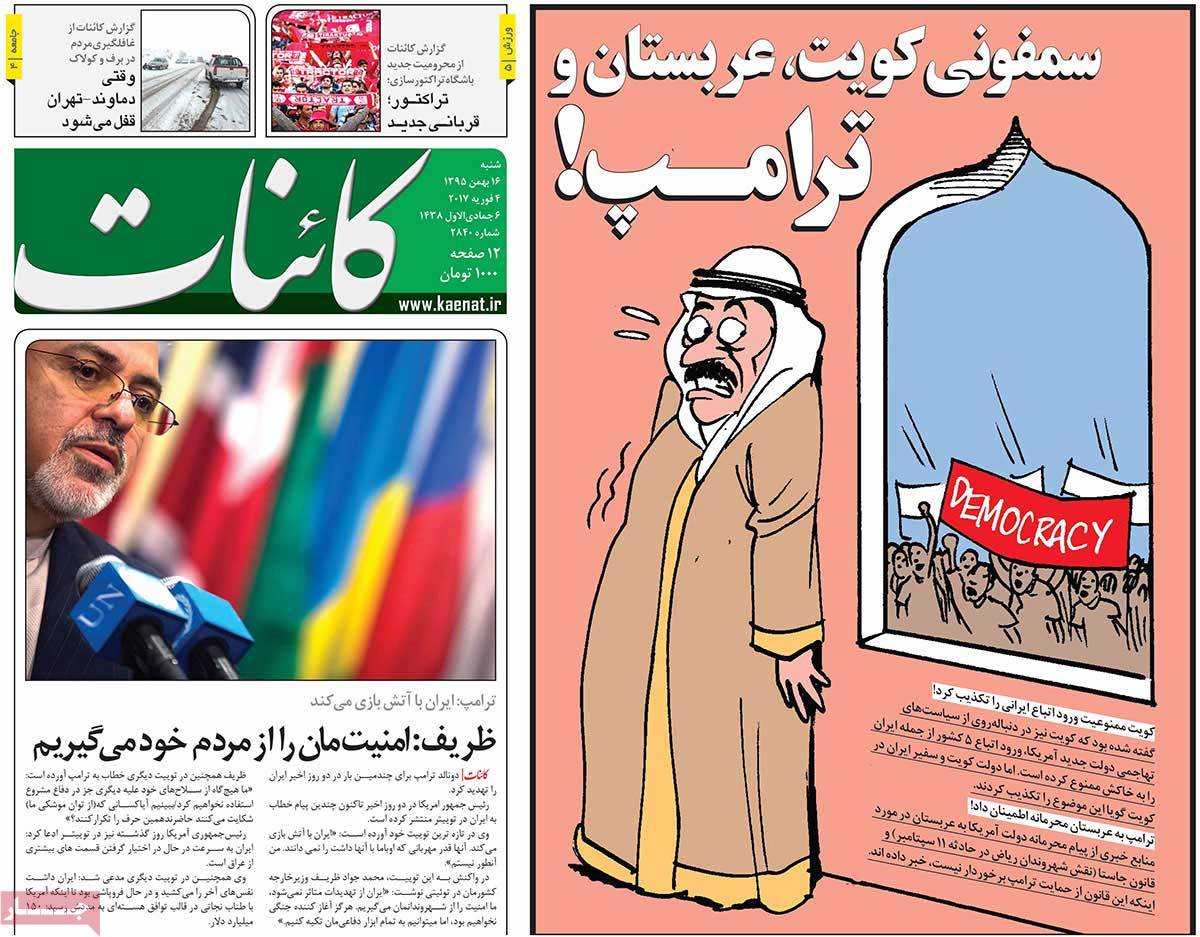 1- Trump’s Threats: From Dream to Reality 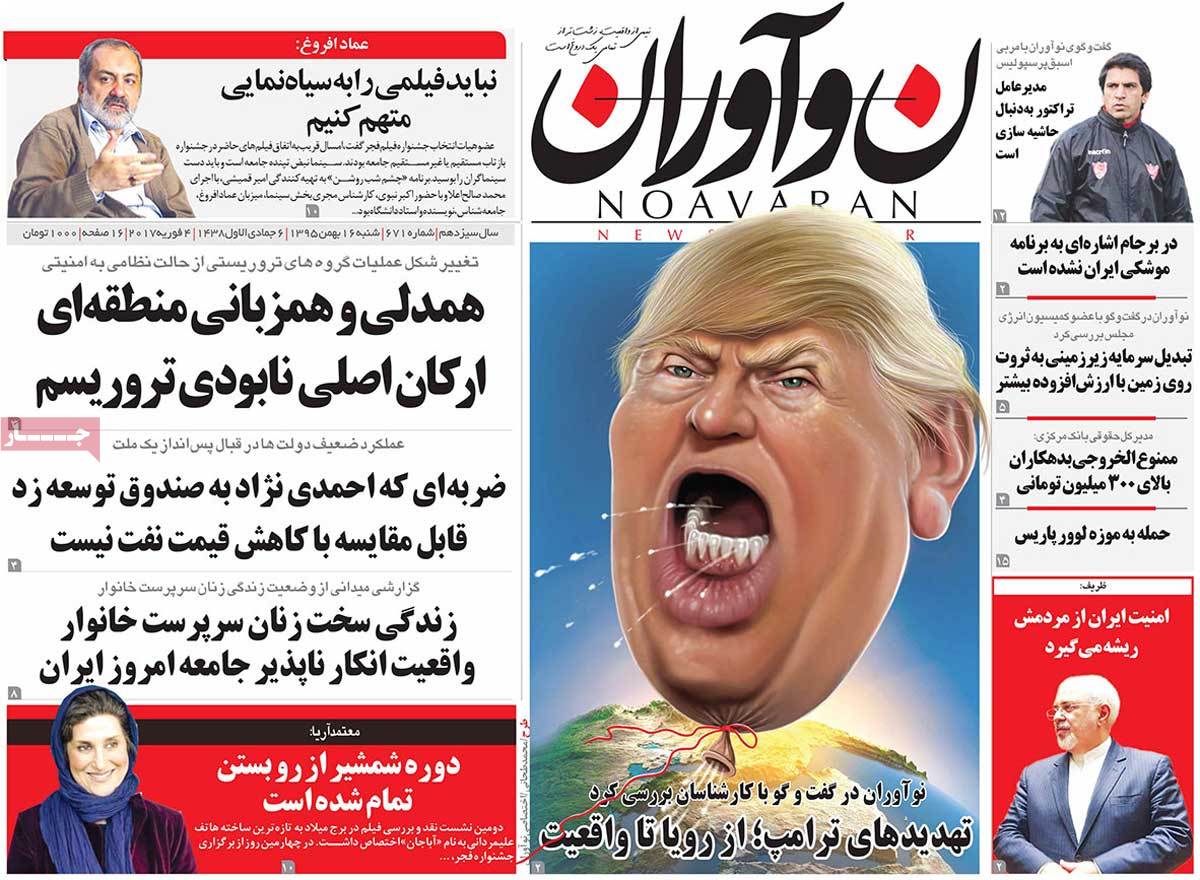 2- Ayatollah Noori Hamedani: US and Britain Scared of Iran’s Power 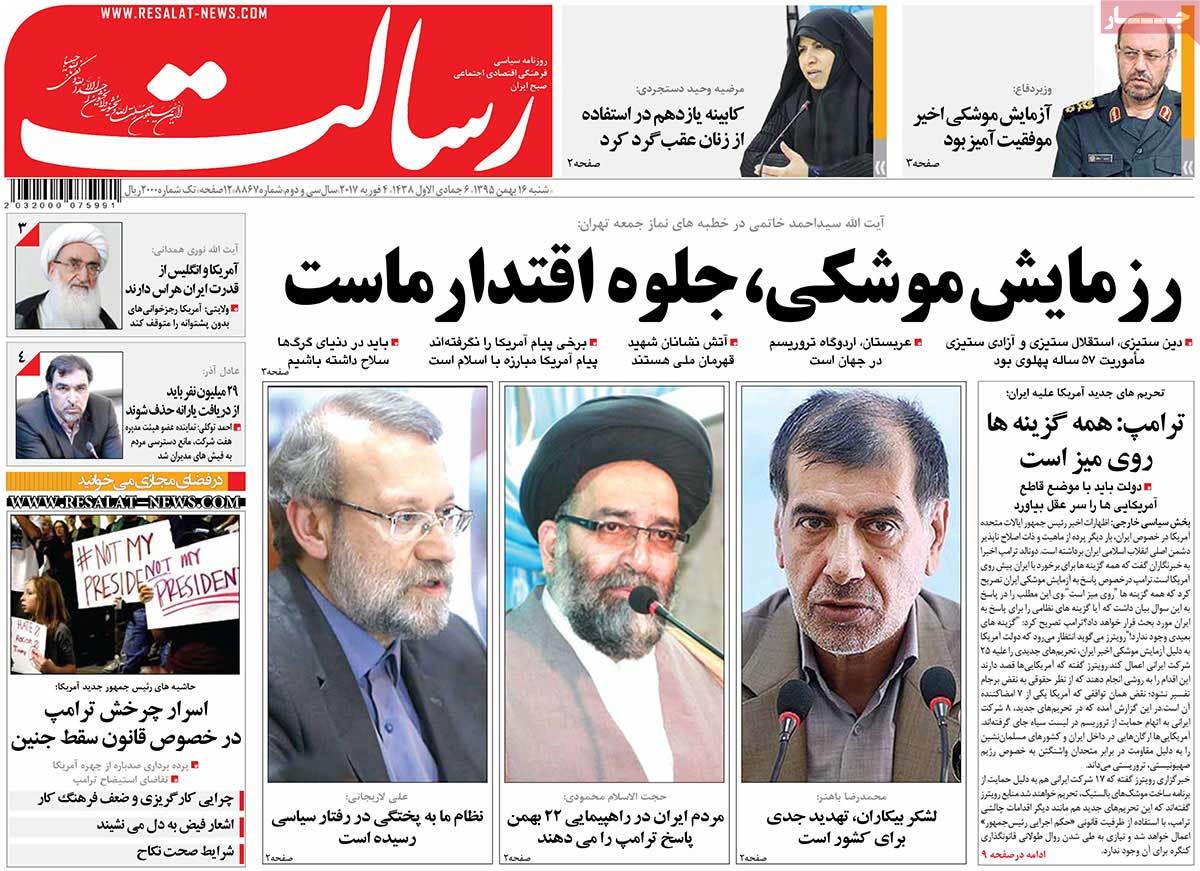 1- Return to Era of Clash: Consequences of US New Policies

2- Alarming Level of Pollution in Khuzestan Province, Southwest of Iran: Province Ranks First in Iran and the World in Terms of Air Pollution 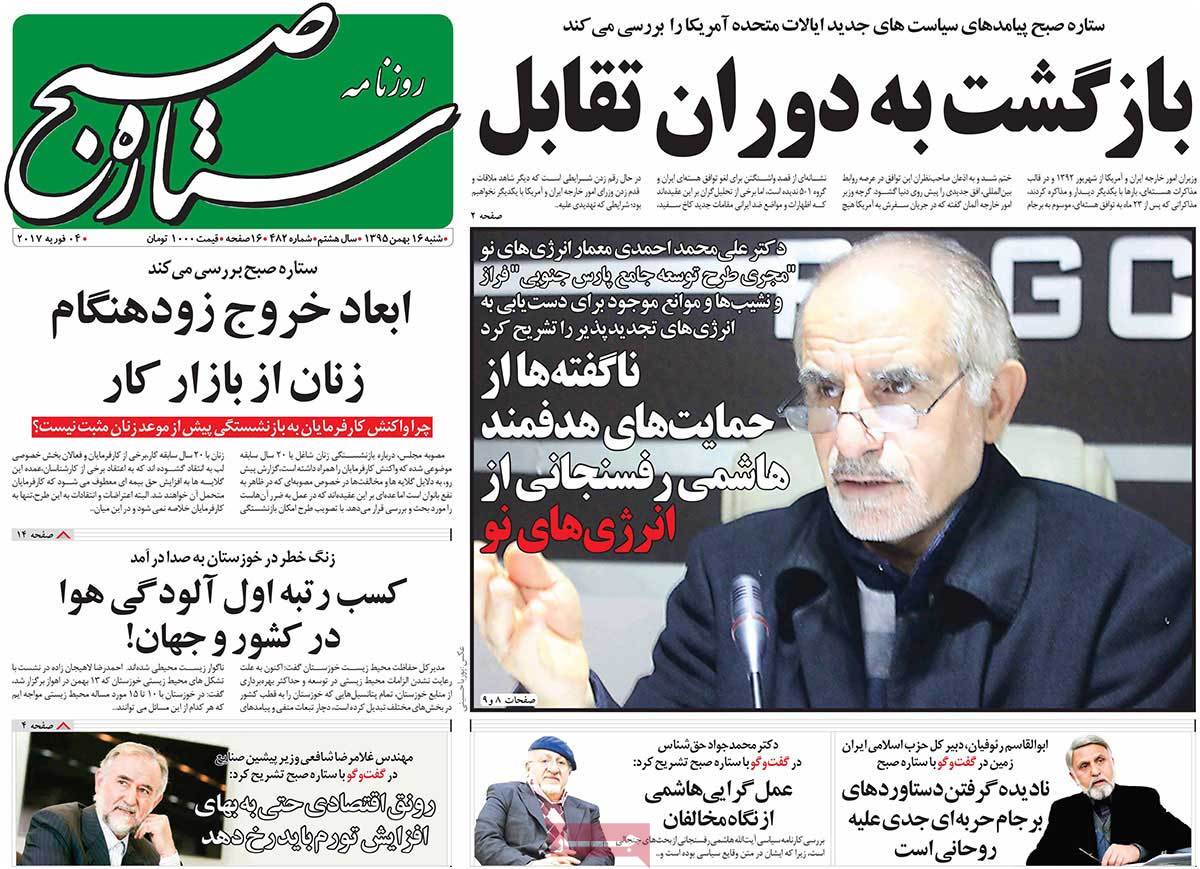 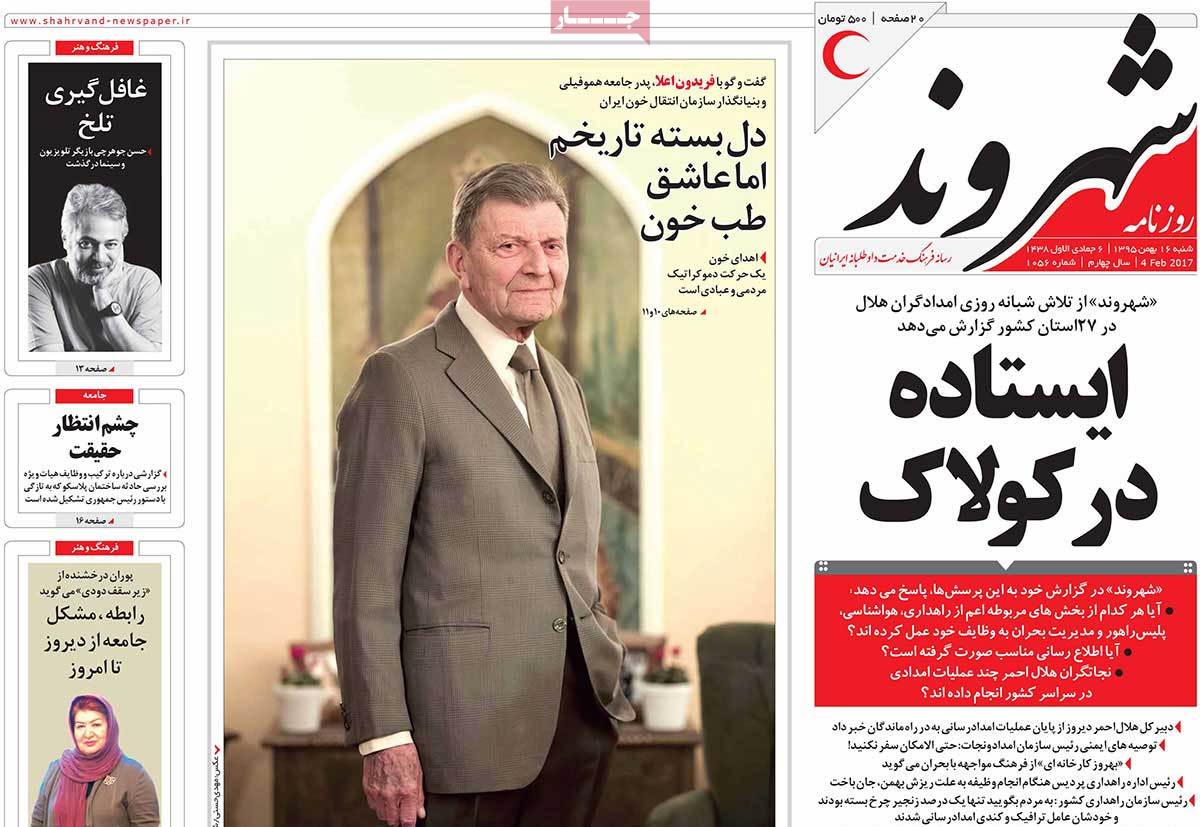 3- Crisis in Crisis Management: Surprise Is the Repeated Reaction of Iranian Officials to Natural Incidents

3- US Didn’t Issue Visa for Iranian Shooters, and Iran Didn’t Let US Wrestlers in 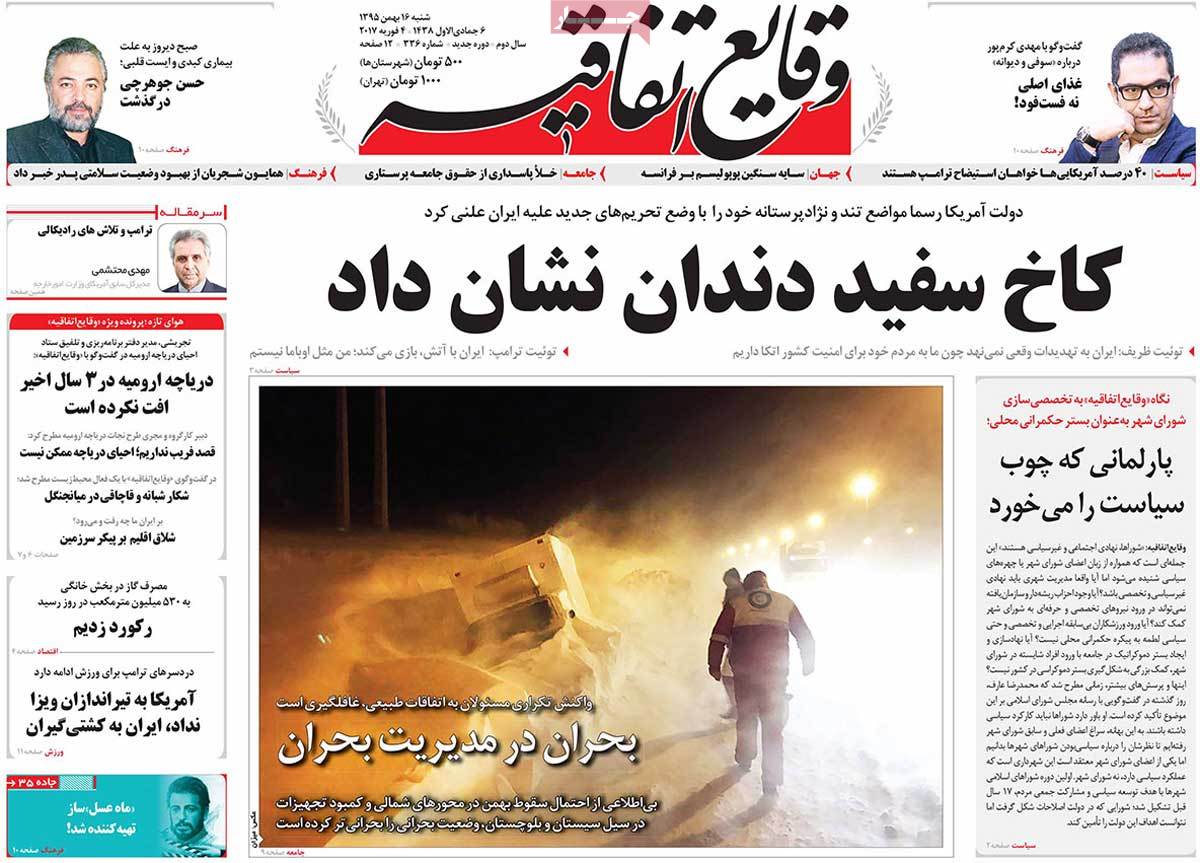