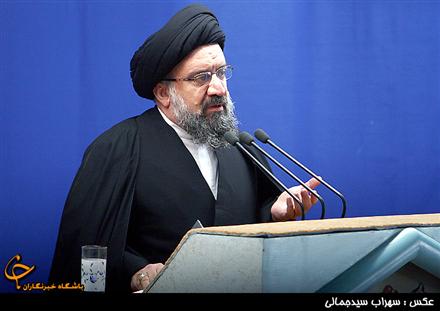 US message is message of fighting Islam: Senior cleric

Addressing the US officials, Ayatollah Khatami referred to the US President Donald Trump visa ban order, which blocks the entry of people from Muslim majority countries, including Iran, and said, “It is 38 years that the Iranian people are hearing your old message of fighting religion and Islam.”

“From the very beginning of Islamic Revolution in Iran, both US democrats and republicans were at odds with the Iranian nation,” the cleric added.

“The US message is not new”, he said in response to a Whitehouse spokesman claim that the world has not received the message of the US presidential election.

The US is friend with the American version of Islam and it is a friend of terrorist groups and boosts them, the cleric added.

He said, “The second message that the Iranian nation took from the recent US presidential election is that Washington does not have minimum respect for the humanity and it is not bound to its obligations.”

The Iranian nation will stand prideful like always and its missile drill is a manifestation of its power, Khatami added.

He noted, “We are living in a world full of wolves like the US and in such a world we need arms to defend ourselves.”

There is no word in the JCPOA that bans Iran from missile drilling, the cleric added.