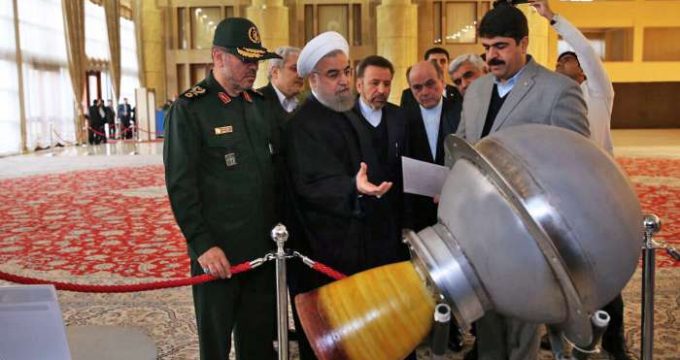 IRNA – President Hassan Rouhani said on Wednesday that successful nuclear talks between Iran and the G5+1 displayed Iran’s political might.

President Rouhani made the remarks at the ceremony marking National Day of Space Technology in Tehran on February 1.

At various historical junctures such as triumph of the Islamic revolution, eight years of sacred defense, the time of unfair economic sanctions and nuclear talks with the world powers, the Islamic Republic of Iran displayed the country’s capabilities, he said.

The Islamic republic of Iran never underestimated its might and that brought the country blessings and success, he said.

Sound implementation of the Joint Comprehensive Plan of Action (JCPOA) brought Iran an ideal opportunity as well as one message, said the president.

The message of the JCPOA is that negotiation plays key role in resolving regional and global disputes and recent talks between Syrian officials and the opposition could be interpreted as the JCPOA’s message, he said.

‘To attain the goal, we should rely on our capabilities and make proper use of others’ experiences,’ Rouhani underlined.

‘For manufacturing centrifuges, some 25 or 26 years ago, Iran imported one centrifuge somehow which made works easy; Then we made it into pieces and copied them. Then obtained the map and managed to build it and from early stages I have been overseeing the job,’ he said.

‘Had we wanted to handle the job single handedly, we would have lost time for some 20 years, which was improper not to use others’ experience,’ he said.

In fact, the JCPOA provided Iran with the opportunity to benefit from others’ experiences more, said the president, adding that Iranians should double efforts in the fields of science, knowledge and space in light of their iron will and gain achievements, which will bring about national pride, power and development.