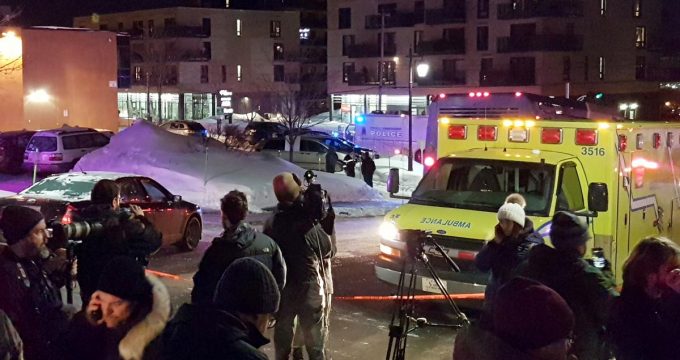 Daily News– A shooting at a Quebec City mosque left at least five dead and more wounded during evening prayers on Sunday, according to local reports.

Two were arrested after police and paramedics swarmed the Islamic Cultural Center of Quebec in the suburban community of Sainte-Foy following reports of gunfire at the Canadian mosque just after 8 p.m., according to the Montreal Gazette.

Quebec authorities did not immediately confirm the number of deaths or those wounded.

A witness told Reuters that three gunmen opened fire on more than 40 worshippers inside the mosque during prayer.

The mosque’s leader Mohamed Yanqui learned of the attack through frantic phone calls.

“Why is this happening here? This is barbaric,” Yangui said.

A member of the mosque told reporters that after 42 years of living in Quebec, he is considering moving back to Morocco.

“We are not safe here,” Mohammed Oudghiri told reporters. He did not witness the attack but he said knew one of the victims and that they taught children at the mosque.

The mosque turned to Facebook to detail the moments after the attack, showing flashing emergency lights and medics crowding around a victim amid piles of snow. A woman can be heard crying.

Earlier on Sunday, the provincial leader distanced himself from a controversial refugee ban that sparked mass protests in the United States and prompted U.S. Customs and Border Protections to deport travelers from seven predominantly Muslim countries.

“No matter our origins, the color of our skin, our beliefs or who we love, Quebec will always be home,” he wrote.

“Tonight, Canadians mourn victims of the cowardly attack in a mosque of Quebec. My thoughts are with the victims and their families,” Trudeau said.

The attack prompted Canadian authorities to increase patrols outside mosques in Quebec and Montreal as police began investigating the assault as a terrorist attack.

In New York, the NYPD also focused more police to the Islamic house of worships.