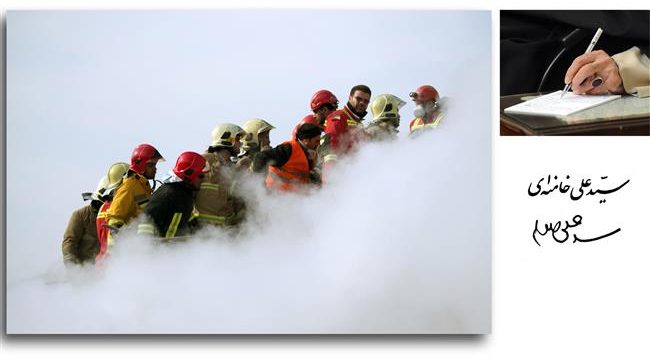 Iranian firefighters sacrificed their lives to save others: Leader

Press TV- Leader of the Islamic Revolution Ayatollah Seyyed Ali Khamenei has eulogized the Iranian firefighters who lost their lives while trying to put out a major fire at the site of a high-rise collapse in downtown Tehran.

The Leader issued a message on Sunday ahead of a funeral procession, which is scheduled to be held in Tehran on Monday for the “brave and faithful” firefighters.

Ayatollah Khamenei said the firefighters ventured into the burning building in order to save the lives and property of their fellow countrymen and sacrificed their lives for this purpose.

Ayatollah Khamenei added that the firefighters once again revived the memories of the sacrifices made by Iranian soldiers during the period of the Sacred Defense, which is a reference to the eight-year Iraqi imposed war on Iran in the 1980s.

The Leader emphasized that these firefighters showed that a faithful Iranian possesses a firm and exemplary determination to fulfill his duty and will not hesitate to offer his life on the path of God.

These [firefighters] are martyrs on the path of a difficult service and fulfilling a risky duty and, God willing, will never be forgotten,” Ayatollah Khamenei stated.

The iconic Plasco building came down and caused the death of several people, including firefighters, after fire engulfed the top floors of the 17-story building on January 19. The incident caused deep shock and sorrow among people in Iran and across the world. Many officials from different countries also offered their condolences to the Iranian government and people over the tragic incident.

Twenty people, including 16 firefighters, lost their lives after the collapse of the Plasco building.